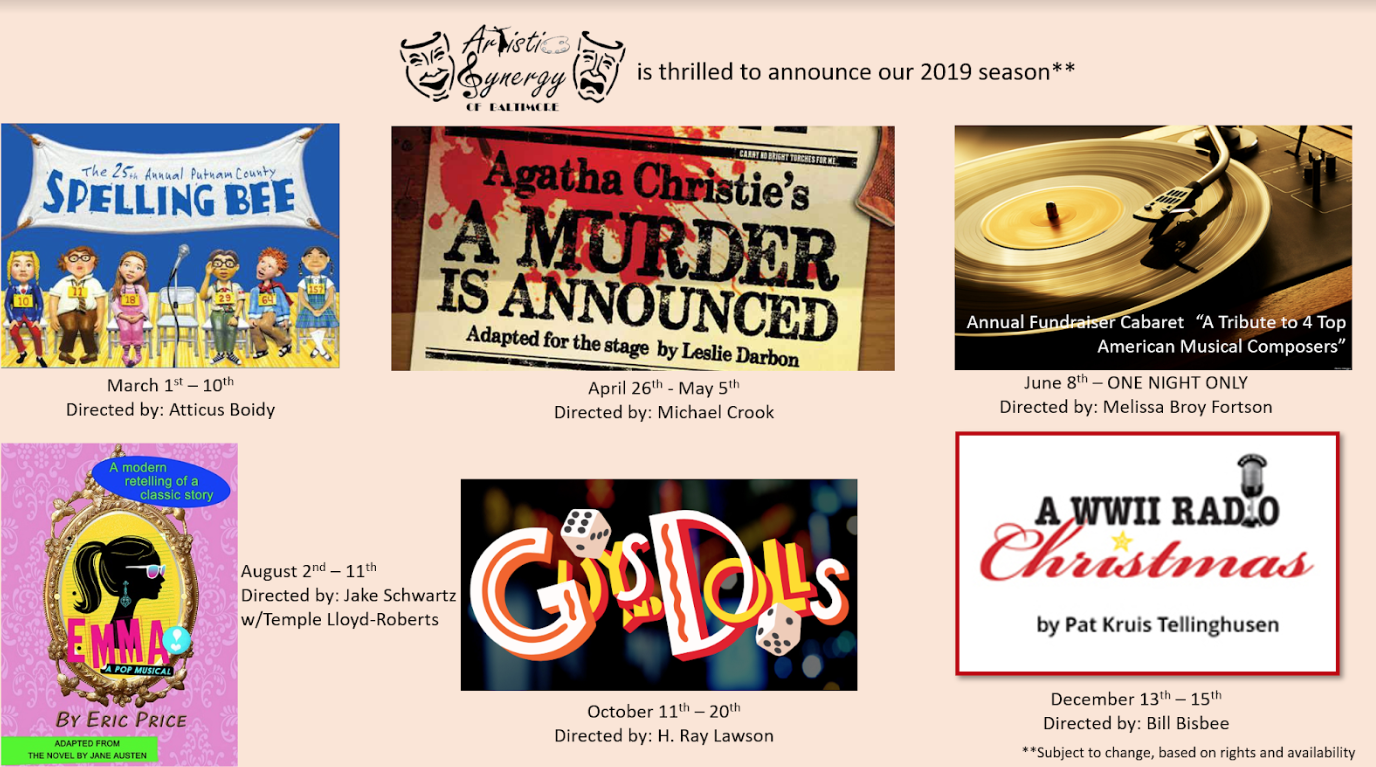 An eclectic group of sixth-graders arrives at the 25th Annual Putnam County Spelling Bee, each eager to win for very different reasons. In hilarious, touching, and catchy songs, each speller reveals his/her hopes, struggles, and passions as they make their way through the competition. With an engaging, tuneful score by William Finn and a sweet, funny book by Rachel Sheinkin. For over a decade, The 25th Annual Putnam County Spelling Bee has caused audiences to fall in love, both with the show itself and its “perspicacious,” “jocular,” and “effervescent” spellers.

A MURDER IS ANNOUNCED

A Murder is Announced by Agatha Christie begins with the newspaper in Chipping Cleghorn, The Gazette, printing a story about a murder. The odd thing is that the murder has yet to take place. Most of the people of Chipping Cleghorn believe that the announcement is merely an invitation for a game, and not an actual murder. The event is advertised to take place at Miss Blacklock’s home at half past six o’clock. Neighbors attend. The lights go out and they hear gunshots. When the place is illuminated, a bullet has grazed Miss Blacklock, and a man lies dead at her feet, a gun next to him on the floor. The neighbors realize the advertisement was not a game—the man really was killed. But was it murder? Or suicide? Maybe it was an accident.

The stages of Broadway have been home to some of the most beloved musicals of all time. Shows from Oklahoma! to Hamilton. Each of those shows, gifted to us by great composers and lyricists such as Stephen Sondheim, Andrew Lloyd Webber, Richard Rogers, Stephen Schwartz, and so many others. For our 5th Annual fundraising cabaret, Artistic Synergy of Baltimore is proud to pay homage to these four great composers. For one-night-only join us for excellent talent, beautiful music and delicious food! Lend your support to community theatre.

Artistic Synergy of Baltimore is proud to present the Baltimore Debut of the hit off-broadway comedy PUFFS (aka Seven Increasingly Eventful Years at a Certain School of Magic and Magic!) PUFFS follows the adventures of three young magical kids as they traverse the difficulties of life in a school of magic… where they strive to be 3rd or Nothing! In a school full of SMARTS, SNAKES and BRAVES the PUFFS stumble through increasingly dangerous years to find their place and make a name for themselves. This truly hilarious comedy has spawned a cult following off-broadway and is finally available to select theaters across the country. Don’t miss out on this magical journey! (8pm shows contain strong language and are PG-13. Matinee shows contain mild language and is appropriate for children 8 and older!)

Emma, a high school senior, is certain she knows what’s best for her classmates’ love lives, and is determined to find the perfect boyfriend for shy sophomore Harriet by the end of the school year. But will Emma’s relentless matchmaking get in the way of finding her own happiness? Based on Jane Austen’s classic novel, this sparkling new musical features the hit songs of legendary girl groups and iconic female singers from The Supremes to Katy Perry. Girl power has never sounded so good!

A musical romantic comedy involving the unlikeliest of Manhattan pairings: a high-rolling gambler and a puritanical missionary, a showgirl dreaming of the straight-and-narrow and a crap game manager who is anything but. Guys and Dolls tells of con-man Nathan Detroit’s efforts to find new life for his illegal, but notorious, crap game. Enter Sky Masterson. Nathan bets Sky that he can’t take the “doll” of Nathan’s choosing to Havana, Cuba, with him on a date. When Sky agrees to the bet, Nathan chooses uptight Evangelist Sergeant Sarah Brown, head of Broadway’s Save-a-Soul Mission. Guys and Dolls takes us from bustle of Times Square to the dance clubs of Havana to the sewers of New York City as it demonstrates the great lengths to which a guy will go when he truly falls in love with a “doll.”

This moving holiday show recreates the experience of attending a recording of a 1940’s radio show broadcast on Christmas Eve during World War II. Using period songs and stories inspired by actual veterans, World War II Radio Christmas transports the audience to another time, brought to you by such generous sponsors as Vaseline Hair Tonic and Ipana Toothpaste. An inspiring look at strength in the face of hardship, this play is a reminder of the importance of coming together for the holidays.