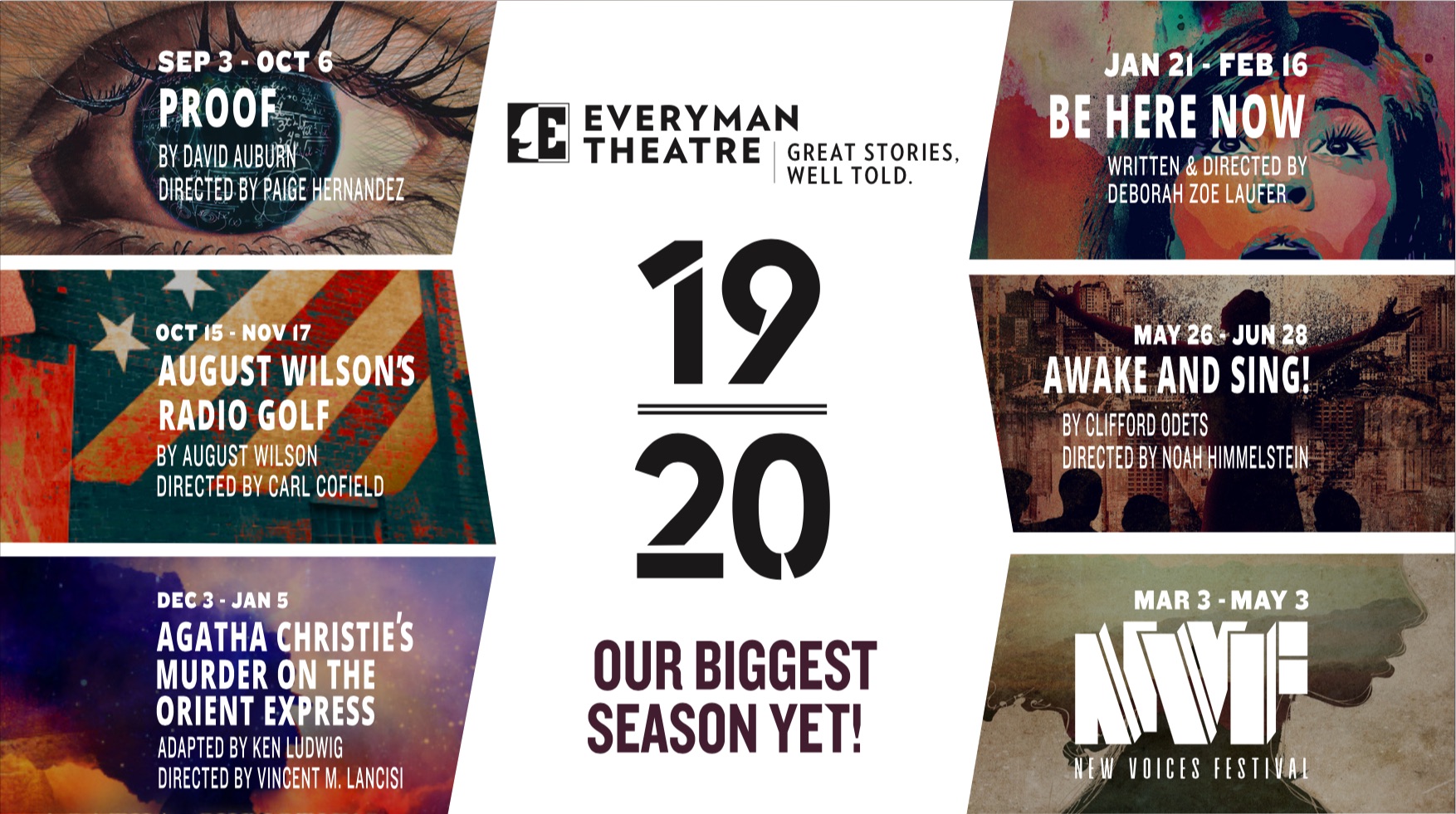 Catherine has inherited her late father’s house, hundreds of his notebooks, and his mathematical genius. Terrified she has also inherited his psychosis, she allows one of his devout students to comb through the writings. When he discovers a revolutionary proof in one of the notebooks, Catherine must face new questions from her past and risk, for the first time, revealing who she truly is to the world and herself. After her breakout role as Catherine in 2003, Everyman Resident Company member Megan Anderson returns to play Catherine’s older sister Claire in this “wonderfully funny... ambitiously constructed” (Variety) Pulitzer and Tony Award-winning modern classic.

Successful real estate developer Harmond Wilks is on a mission to become Pittsburgh’s first black mayor by doing whatever it takes to transform his childhood neighborhood from blighted to bustling. But when he learns the truth about his family’s legacy, he is forced to decide whether he will finish what he started or fight to preserve his community’s history. This fast-paced, crackling conclusion to August Wilson’s unparalleled 10-play The American Century Cycle examining the African-American experience in the 20th century is “surprising, suspenseful and crowd-pleasing” (The New York Times), and draws striking parallels to the issues we still face today.

Board the exotic Orient Express as it takes off into the opulence and grandeur of the 1930s, with a train full of suspects and an alibi for each one. This dazzling new adaptation of Agatha Christie’s masterpiece from comedic master Ken Ludwig is filled with twists, turns, and larger-than-life characters. Wax your mustache and bring your family as detective Hercule Poirot solves the perfect murder mystery this holiday season.

Bari rolls her eyes at yoga classes, doesn’t see the point in dating, and just got fired from teaching nihilism in New York. Now back in her rural hometown, her despair has reached new levels—and so have her recurring headaches. Somehow they are giving her bizarre, almost religious experiences that are making her feel… happy… ecstatic… and in love? They’re also killing her. Now, Bari must decide whether it’s better to live a short, joyful life, or risk a lifetime of depression. From acclaimed playwright, Deborah Zoe Laufer, Be Here Now is a comedic look at what we’re willing to do for love and happiness and to create meaning in our lives.

A world premiere production commissioned by Everyman Theatre, the third and final installment of Jennings’s award-winning Queens Girl series reunites Resident Company Members Paige Hernandez as director and Dawn Ursula as the indomitable Jacqueline Marie Butler. As the Vietnam War rages and the Kent State killings ignite college campuses across the country, Jackie arrives in Vermont to begin college. Caught between wildly divergent sets of friends—outrageously wealthy “WASPS,” militant black activists and passionate theatre people—Jackie is forced to confront the space between white and black culture to find her place in the world.

Mississippi, 1920. Leroy returns to the doorstep of his long-lost lover, Berta, covered in blood after committing a shocking crime. With his freedom in the balance, the clock is ticking for him to make amends. As their quarrelsome beginning transforms into an impassioned consummation of their love, can the inevitability of his fate be averted? A hit from last season’s Contemporary American Theatre Festival, this “riveting, gut-wrenching fable“ (DC Metro Theater Arts) weaves an intimate, yet epic love story inspired by the prison work song, “Berta, Berta.”

2 a.m. feedings, dirty diapers, and other hazards of new motherhood are enough to give anyone sleepless nights. This no-holds-barred comedy from award-winning writer Molly Smith Metzler (Shameless, Orange is the New Black) holds both a microscope and a megaphone to the joys and perils facing new parents today, whether you’re ivy-educated or in night-school. Join Jessie and Lina in their Long Island backyards where the wildly different, but equally difficult parenting decisions facing each mother—and the neighbors in the mansion up on the cliff—are “worth your attention, whether you are a member of the mommy brigade or not” (Broadway World).

In a crowded Bronx apartment, three generations of the working-class Berger family struggle against the odds during the Great Depression to make ends meet while keeping their dreams for tomorrow alive. Gritty, funny, and full of soul, Awake and Sing!—originally performed by the renowned Group Theatre—is considered Clifford Odets’s finest work. It beautifully captures the ambitions and heartaches of a Jewish immigrant family who must weigh the costs of holding onto an enduring belief in the American dream. Almost a century after it was written, it remains profoundly relevant.

The 2019-2020 Salon Series features staged readings of four new works written by emerging female playwrights, directed by female members of the Everyman Resident Company. These Monday evening performances cost $20 and include a cocktail hour for mingling and conversation.

When Zoe, a black student at a liberal arts college, is called into her white professor’s office to discuss her paper about slavery’s effect on the American Revolution, a polite clash in perspectives explodes in this “bristling and proactive debate play about race and privilege in the United States.-” The New York Times.

A richly funny, uniquely uplifting new play from actor and author, Nia Vardalos (My Big Fat Greek Wedding) based on Cheryl Strayed's book of the same title. Thousands of people have turned to Sugar, an anonymous online advice columnist. At first unsure of herself, Sugar finds a way to weave her own life experiences with the deep yearning and real problems of her readers helping others navigate love and loss.

When Sabrina Jackson's son is the victim of a police shooting, she retreats inward in this powerful and fantastical new play from Inda Craig-Galvan. Rather than herald the Black Lives Matter Movement, Sabrina finds herself living out her son's comic book superhero fantasies. Will Sabrina stay in this dream world or return to reality and mourn her loss?

A noted photographer sets out to explore the topography of “scars.” Her journey lands her in the mysterious realm of an undiscovered folk artist hiding away on a small farm in North Alabama with her two goats. This intimate and funny portrait explores the meaning and purpose of art and the struggle of the lost and tortured souls that seek to create it.