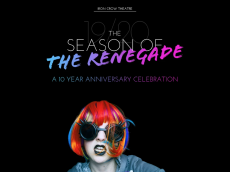 COLLECTIVE RAGE: A PLAY IN 5 BETTIES

Heralded by The New York Times as “a full-tilt lesbian/bi-curious/genderqueer/Shakespearean comedy for everyone,” Collective Rage, A Play in 5 Betties follows five different women named Betty as they collide at the intersection of anger, sex, and the “Thea-Tah.” Betty is rich; Betty is lonely; Betty’s busy working on her truck; Betty wants to talk about love, but Betty needs to hit something; and Betty keeps using a small hand mirror to stare into parts of herself she’s never examined. Award-winning playwright, Jen Silverman’s absurdist dark comedy is simultaneously hilarious, inspired and boldly unapologetic. Are you ready for the revolution?

Bare, the worldwide coming-of-age rock musical phenomenon and one the most significant pieces of contemporary queer musical theatre, follows a group of high school renegades at a Catholic co-ed boarding school as they wrestle with their sexuality, their religion, and ultimately their identity. With deep honesty, alarming cultural relevance and a gritty, alt-rock-pop score reminiscent of RENT and Next to Normal, Bare delivers one of the most powerful and gripping theatrical experiences of this generation — an introspection into the fragility of our "bare" humanity.

Baltimore's award-winning and favorite tradition, The Rocky Horror Show, returns with a Valentine’s Day spin like you've never seen before! Experience this quintessential queer theatrical experience live on stage — complete with call-outs, cascading toilet paper, and an array of other audience participation props. In this live stage musical best known for the 1980’s cult film, sweethearts Brad and Janet, stuck with a flat tire during a storm, seek shelter at a mysterious old castle on a dark and stormy night, where they encounter transvestite scientist Dr. Frank-N-Furter. As their innocence is lost, Brad and Janet meet a houseful of wild characters, including a rocking biker and a creepy butler. Through elaborate dances and rock songs, Dr. Frank-N-Furter unveils his latest creation: a muscular man named "Rocky." Bring your sweetheart (or sweethearts!) to this deliberately kitschy rock 'n' roll sci-fi gothic thriller, now more daring and outrageous than ever!

In a contemporary society that often insists you can only be one or the other — Ben likes beer, sports, Emily — and Chris. A provocative, intricate and compelling comic drama, Straight takes us on an enthralling exploration of sexuality and identity in a "post-equality" America. Funny, sad, sexy and surprising, this complex love story featuring three actors in a tour-de-force performance takes aim at the moral neurosis of a generation that prides itself on the pretense of acceptance.