Rubys Grantee Kel Millionie's project, The Sorrow Message, will debut at Baltimore Theatre Project this April. The Sorrow Message is an innovative dark-fairytale told with aerial acrobatics, music, movement theatre, and acting. The story, written by Annelise Montone, explores a young boy’s challenges with relationships, courage, death, and family dynamics through highly athletic circus arts. This project is being produced by Daydreams + Nightmares Aerial Theatre (DNA Theatre), of which Kel is Artistic and General Director.

The show will run Thursdays through Sundays from April 9 to 19, 2015 and take place at Baltimore Theatre Project (45 West Preston Street, Baltimore 21201). There will be a student matinee on Thursday, April 16 at 10:30am. Tickets available at: http://dna-theatre.tixato.com/buy/ 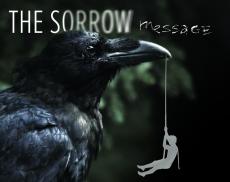