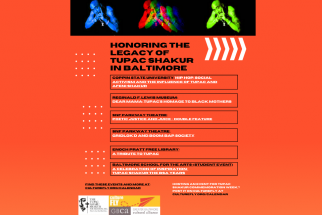 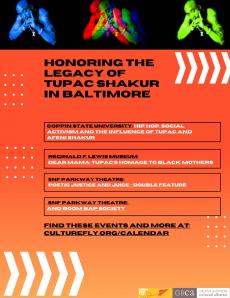 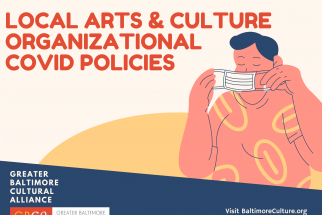 Are you confused by Baltimore City’s new mask mandate? Have you been wondering how local cultural attractions and arts venues are keeping staff and visitors safe as they return to in-person events? Are you unsure whether to attend a live performance or enjoy a day out at the museum? Then let GBCA help!

Mother’s Milk is a 2-6 week interdisciplinary residency, designed to support three or four visual artists, sound artists, or creative writers, who are pursuing innovative work in their field. The goal of this program is to provide individuals or collaborators with the time and space to pursue their creative projects alongside other residents whose different perspectives, backgrounds and interests offer inspiration and interaction. Work that is more experimental in nature without regard to commercial viability is of special interest.

Moving Body festival platform is dedicated to connecting artists, mediums and audiences through art that shares a strong choreographic sensibility.

Emery Community Arts Center, in partnership with The New Commons Project, invites artists to submit their work for consideration in our upcoming thematic exhibition, "Reimagining the Real."

This exhibition will feature artworks that engage the legacy of realism in the 21st century, continuing, complicating, or contesting this tradition. We welcome artwork submissions of all media.

The Lewis Prize for Music is now accepting 2022 Accelerator Awards applications. Accelerator Awards are open to Creative Youth Development (CYD) music organizations seeking to influence youth-serving systems so all young people have access to learning, creating, and performing experiences that reflect their culture and identity.

Yes, today, “May the Fourth be with You,” but tomorrow is the day to celebrate Cinco de Mayo. The fifth of May commemorates the Mexican army's victory over Napoleon III's French forces at the Battle of Puebla on May 5, 1862. In the United States, Cinco de Mayo is the opportunity to honor Mexican culture and heritage.

Last Friday, MICA and GBCA presented the eighth Baltimore Thinkathon in its first virtual iteration. Topics of investigation included Artists’ Wellbeing, Archives and Marginalized Communities, the Work of Museums, and the Arts Economic System. More than 50 people spent four hours delving into their subjects, sharing wisdom, creating pathways for action, and building new communities. Thank you to Sheri Parks, Vice President for Strategic Initiatives, and her wonderful team at MICA. We can’t wait to see what new projects and partnerships emerge from the day.

It’s a beautiful spring day that should be filled with hope and promise. Instead, our country is again experiencing the trauma of policing that has resulted in the death of another Black man, Duante Wright. The roiling anger and sorrow in response to this and so many events are manifested through protests around the country.

On behalf of the Greater Baltimore Cultural Alliance (GBCA) and William G. Baker Jr., Memorial Fund, it is my honor to announce the 2021 Baker Artist Awardees. In order to serve a greater number of artists during the COVID-19 pandemic, this year, six artists from each of the six award categories have been awarded prizes of $2500 each. These 36 incredible artists were selected by an anonymous jury of local and national professionals from the Baker Artist Portfolios website.

On March 16, 2021, in the Atlanta, Georgia metropolitan area, eight people were murdered. The shooter killed eight people and wounded one. Six died at the scene, one on the way to a hospital, and one in treatment. Their ages ranged from 33 to 74, with five of the victims above 50. Six victims, four at Piedmont Road and two at Cherokee County, were women of Asian descent. The others were a white woman and a white man, and the survivor is a Hispanic man. The South Korean Foreign Affairs Ministry reported that four of the dead were of Korean ethnicity, and one was a South Korean citizen.

Baltimore has a rich literary history and tradition. While Edgar Allen Poe and H.L. Mencken have been mythologized, we are a city of many diverse voices who lead the world in intellectual and creative talent. Institutions like The Enoch Pratt Free Library and organizations like the CityLit Project are manifestations of our respect for these voices and commitment to the written word. The two organizations have joined to present the CityLit Festival -Reimagined: a virtual celebration of the literary arts.

It's my pleasure to talk about a bright spot during the pandemic. Pangelica Hall has joined the GBCA team as the new Executive Assistant. This is actually Pan's return to GBCA. In 2016, she was our marketing and communications intern and helped transform our social media presence. Here's more about Pan, her artistic practice, and her GRL PWR collective.

Valentine’s Day brings to mind the many ways that love can be expressed. During this insane time, the comfort of healing love is particularly important. Since 2018, the Sound Rounds program has brought Peabody Institute musicians into patients’ rooms at Johns Hopkins Hospital to provide comfort and help relieve stress through music. While it was originally an in-person program, the pandemic-inspired switch to virtual visits has made it possible to reach a larger number of patients and staff, boosting morale during this very challenging year.

Like so many aspects of our lives, the COVID-19 required transition to virtual learning has thrown a spotlight on inequities in education. The cultural sector is deeply committed to bringing more balance and making sure that every child has access to high quality learning opportunities. That’s why Arts Education in Maryland Schools and Arts Every Day are active members of the Maryland Education Coalition (MEC).