Inside the Rubys: David Smooke

Part of a series of interviews with current and past Rubys grantees. Interested in learning more about the Rubys Artist Project Grant program? Go here. 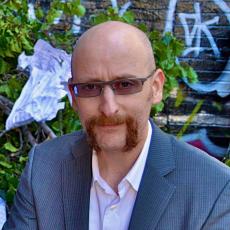 David Smooke is a composer, musician, and Chair of the Music Theory Department at the Peabody Conservatory of Johns Hopkins University. In addition to his composition activities, David performs improvisations on toy piano with the support of Schoenhut toy pianos, co-curates the Lunar Ensemble, and has written extensively for NewMusicBox, the online magazine of New Music U.S.A. David received a Rubys grant to support the completion of A Baby Bigger Grows Than Up Was, an hour-long monodrama based on a text by writer Michael Kimball, with visuals by filmmaker Margaret Rorison and performed by New York based ensemble loadbang. The debut performance will take place on September 8 and more info can be found here.

​David: I first lived in Baltimore from 1993-96, while I earned my MM at Peabody and then for a year after. Following a stint in Chicago, I returned to Baltimore in 2007 to begin work at Peabody, where I currently teach and am the faculty advisor for our newly created experimental music ensemble called Now Hear This.​

GBCA: How would you describe your musical/sonic style?

​David: When asked at a party, I generally say that I make weird noises. When pressed a bit further, I'll describe what I do as experimental concert music, for want of a better term. My music seems to oscillate between the extremes of funky rhythmic grooves and simple sonic stases. I like to push the boundaries of what is possible on acoustic instruments, enjoying the exploration of unusual sounds that involve a lot of resultant noise. ​A Baby Bigger Grows Than Up Was mainly presents a constantly-shifting groove that gradually and imperceptibly intensifies over time, every once in a while interrupted by long areas of extreme calm.

GBCA: Can you describe the inspiration and process to create A Baby Bigger Grows Than Up Was?

​David: This piece began when my friend, the Baltimore writer Michael Kimball, told me that he was about to publish a book that I might enjoy because the organization of some of the pieces in the book reminded him of my music. Since he published it under the pseudonym​ Andy Devine, the book "tour" involved various people reading as if they were the author. Michael asked me to do one of these readings and I included an excerpt from the story A Baby Bigger Grows Than Up Was, which is published alphabetically, so that each word repeats as many times as it might have been encountered in a traditional story before moving on to the next—as many as 443 repetitions—inexorably moving from "a" through the alphabet, to the concluding punctuation. In reading excerpts from this story aloud, I realized that its power arose from the way that the words gradually lost their meaning and turned into sonic events as I quickly expelled them into the room, while at the same time the relative stress and juxtaposition of these words conveyed intimations of a traditional narrative structure. For example, the word "dad" is only said once, immediately proximate to "cut," "dark," and "darker," while "mom" occurs 72 times, surrounded by "milk," "missing," and "more." From these hints, we begin to get a sense as to what the life of this Baby might have been like.

I was in talks with the New York based ensemble "loadbang" to write something for them, and they were scheduled to premiere what we all expected would be a short piece in March 2013. I kept finding myself drawn to this very long story, and so was forced to send them an excerpt of what would become this hour-long piece instead of a complete work. (This excerpt ended up becoming what I call Volume I of a seven-volume work.) The members of loadbang were intrigued by the initial snippet and asked for me to complete the work for the following year. However, it became a huge project—I was initially expecting the whole work to last for only 30 minutes—and I found myself unable to complete it in a timely fashion. Thanks to the support of a Rubys Grant, I was eventually able to dedicate myself to nothing but this one piece, and to finally complete the whole composition, nearly three years after beginning it.

The Rubys Grant also allowed me to collaborate with the Baltimore filmmaker Margaret Rorison, who is creating visuals that will be part of the premiere event.​

GBCA: What experience do you want audiences to have with this work?

​David: This is probably the hardest question I've ever been asked! I hope that the music will help people groove a bit and meditate a bit, and that they will enjoy hearing sounds that they've never heard before and might never hear again. I hope that they will be awed by the creativity of Michael, who created a sort of fiction unlike anything I've ever experienced. I hope that they will ​be entranced by Meg's visuals, which will provide the sort of physical foundation that music can never provide on its own. And I hope that people will come away from the premiere thinking that they might want to support more local Baltimore artistic events.