7 Wonders of The Walters’ 1 West 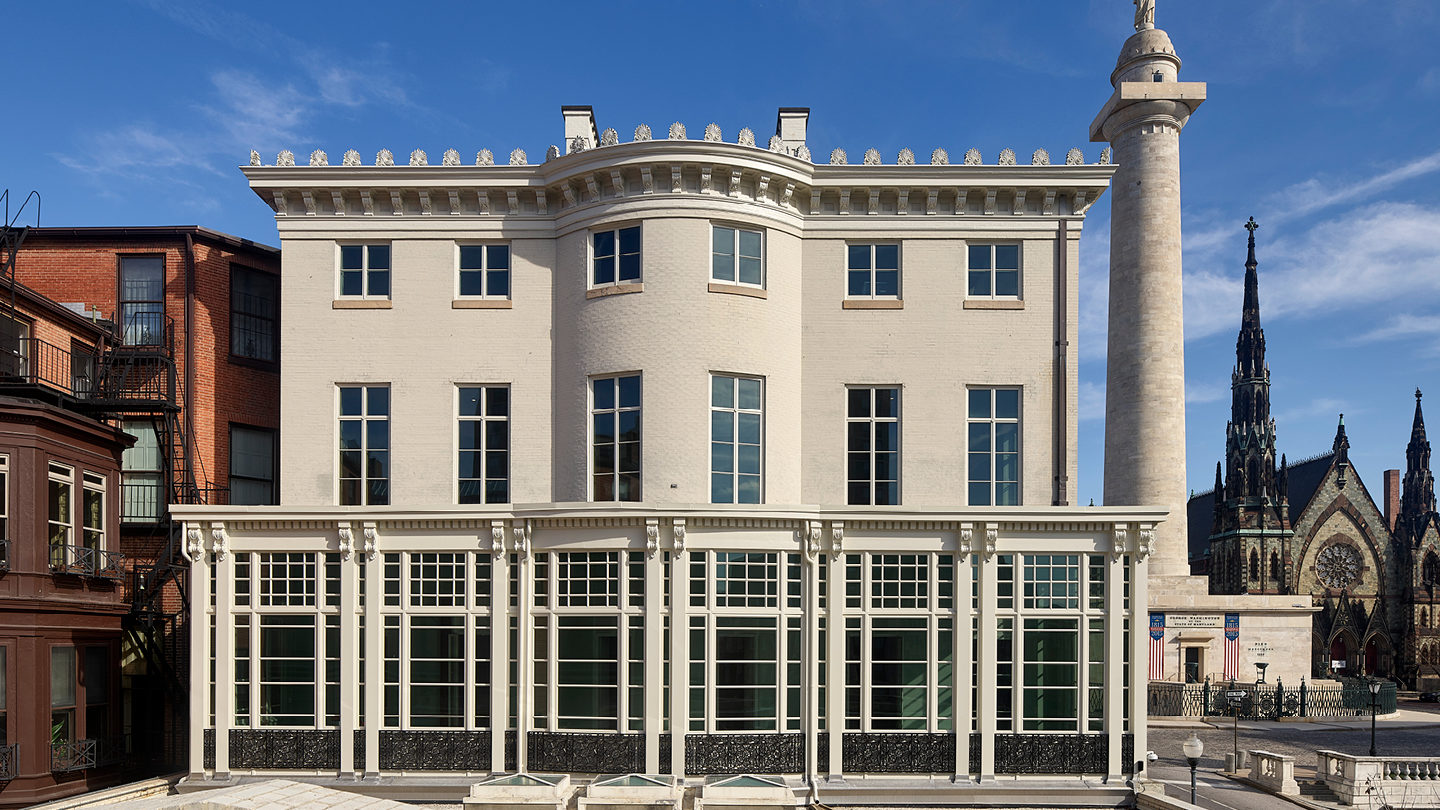 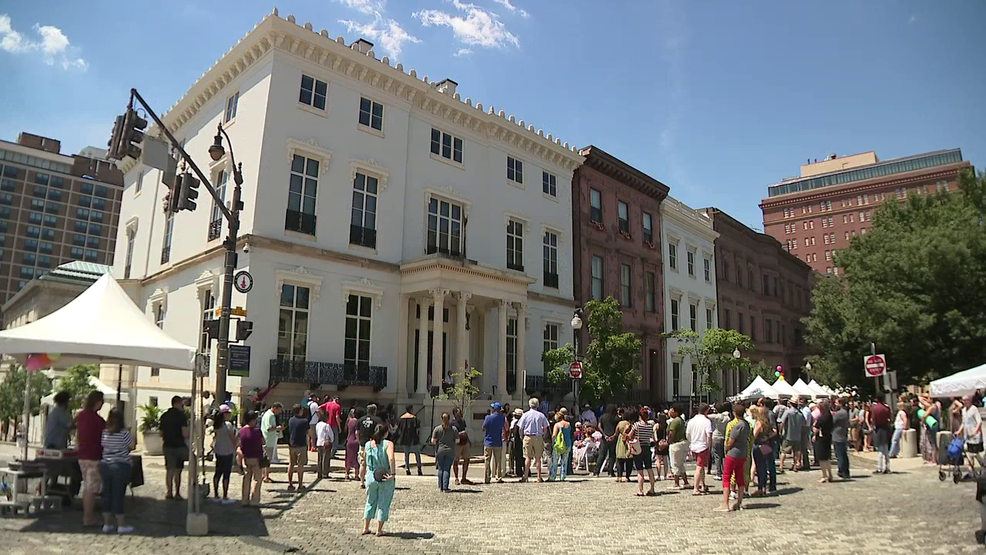 Guests enter the spectacular 1 West, which like The Walters is free and open to the public, from inside the museum or from a side door on North Charles Street, passing the recently reopened Asian art exhibit to get to the light-filled robin’s egg blue conservatory that features a striking floor-to-ceiling glass case of colorful Chinese ceramic vessels before entering the restored mansion.

First built in 1850, the mansion has had several different owners and undergone multiple renovations. It officially opened as part of The Walters in 1991, a few years after philanthropist Willard Hackerman donated it to the city in 1984. Now, 1 West is completely updated for the 21st century. The $10.4 million project includes stunning architectural features like intricate plasterwork on the ceilings and walls, a grand spiral staircase topped with a green-and-amber Tiffany glass skylight, a library encompassed in rich mahogany, and a smartphone app.

Here are just 7 elements of the marvelous 1 West Mount Vernon Place, which is open Wednesday through Sunday.

You’ll notice something different about the installation—there aren’t many labels with descriptions. Don’t worry; this isn’t because The Walters just decided to not share anything about the home or the objects on display. They want to share way more information than can fit on a label, so they commissioned an app. Download the free interactive 1 West app to explore the home at your own pace, and delve as deeply as you like into the trove of information The Walters has collected about the house and its history. 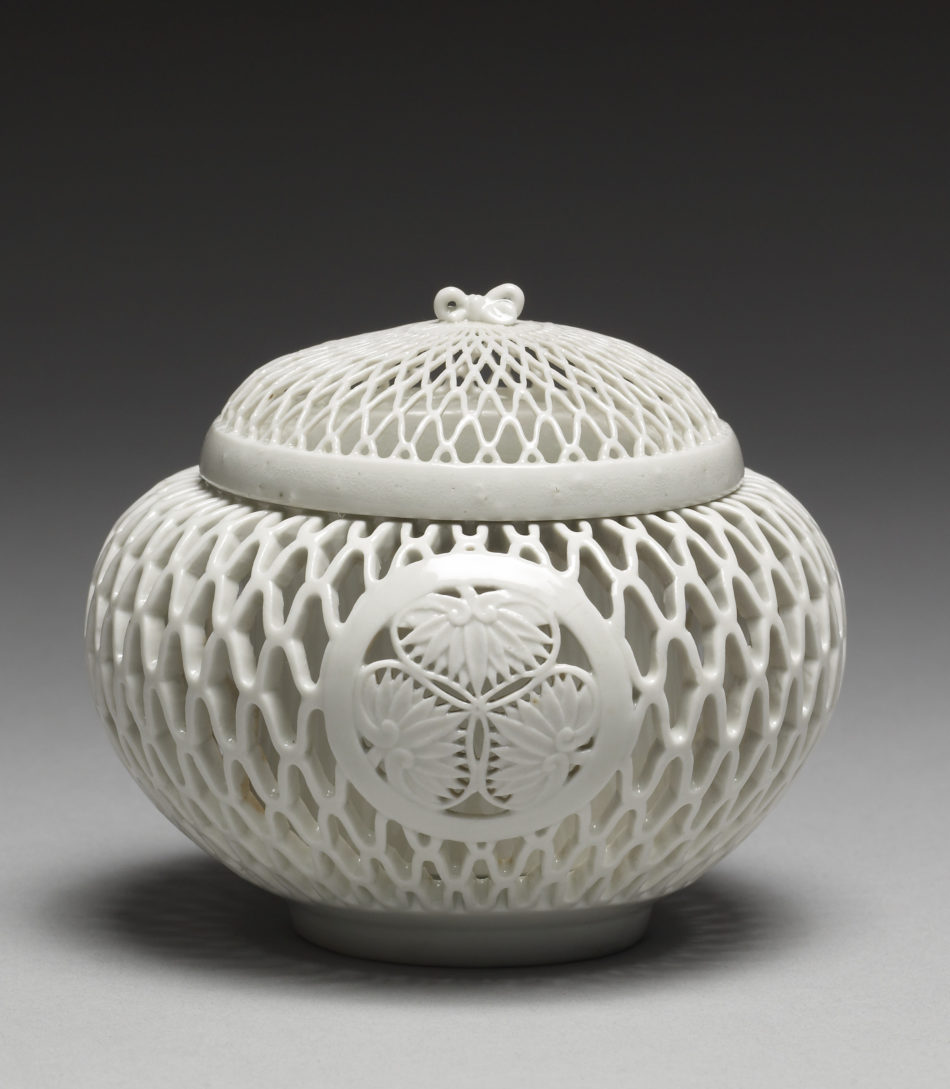 Much of the first floor installation explores the building’s history, the people associated with it, and connections with Baltimore through 19th-century paintings, sculpture and decorative arts that are a part of The Walters’ permanent collection. One historical artifact is particularly intriguing, a huge facsimile prominently displayed in the dining room of an 1861 letter written by Sybby Grant, the enslaved cook of the original owners of 1 West. Grant wrote the letter to the home’s owner when he was imprisoned for secessionist activities. The subject matter is of the canvasback ducks and terrapins she had been cooking for the family in his absence.

The Baccarat-style chandeliers original to the house have been cleaned and restored to their golden-tinted glory. The Walters’ conservation team had to work on scaffolding in the house to restore the two formerly gas-lit “gasolier” chandeliers, each with 36 “candles” and 141 two-tiered crystal pendants. Now the chandeliers feature electrical lighting. When the house was previously open from the 1980s through 2014, the chandeliers hung over bulky display cases. Now, stylish and modern circular orange corduroy couches allow visitors to gaze up as the newly glittering crystals and take in the rest of the salon in comfort. 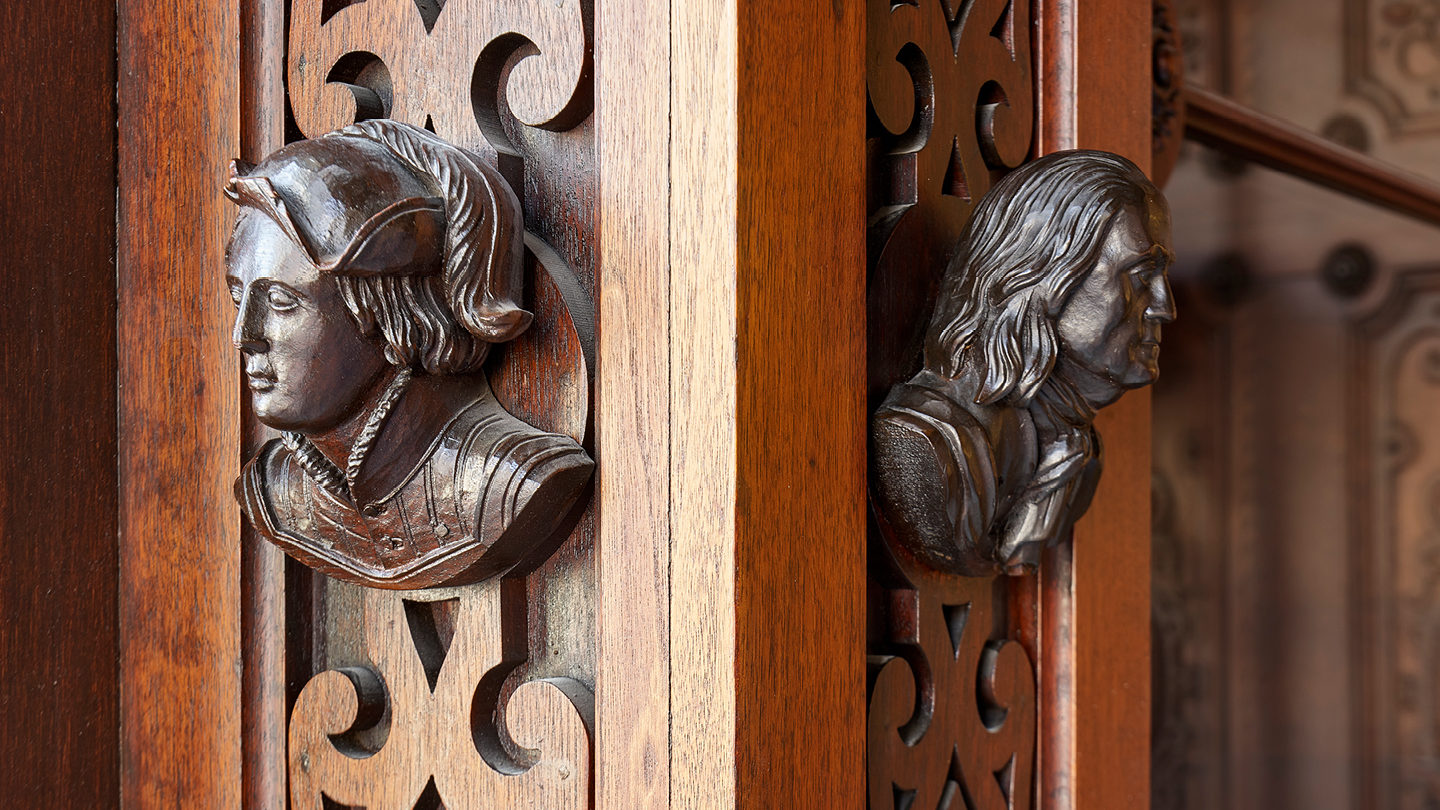 In addition to shining up the mahogany woodwork on the ceiling and walls, which also include dozens of intricate protruding mahogany heads of historical and literary figures like William Shakespeare and Ben Franklin; the Walters’ conservation team restored the fresco-esque plaster painted walls to their original 1850 form. The walls had been covered with heavy brocade fabric since the building’s first major renovation in the 1890s. The library also includes a central table with iPads for browsing the museum’s digitized manuscripts. 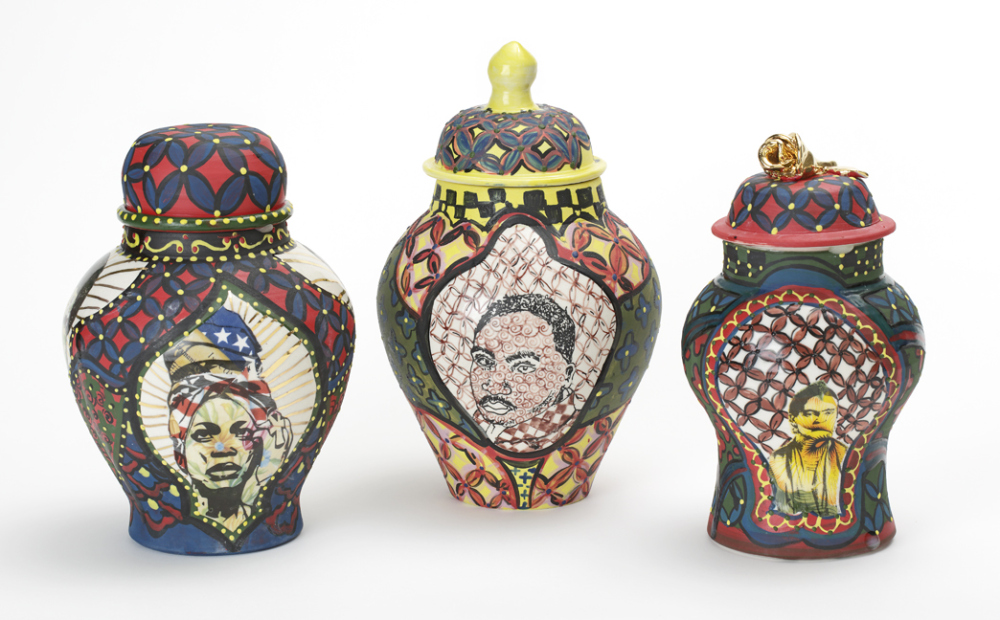 The first floor features new works by ceramicist Roberto Lugo, who through traditional techniques and forms tackles contemporary subject matter that reflect his experiences as an artist of color. Lugo has created a series of ceramic pieces that act as commentaries on and tributes to aspects of African-American life in the past century and a half. His work grandly features figures such as Colin Kaepernick and Freddie Gray, as well as Frederick Douglass and John Brown. There’s also a porcelain vase with images of Sybby Grant’s ducks and terrapins. Commissioned by the museum, Lugo, who lives in Philadelphia and teaches at Temple University, incorporated some of The Walters’ collection into his pieces. Pay attention to the fancy potpourri holder in the salon, which has images of slaves crammed into ships. 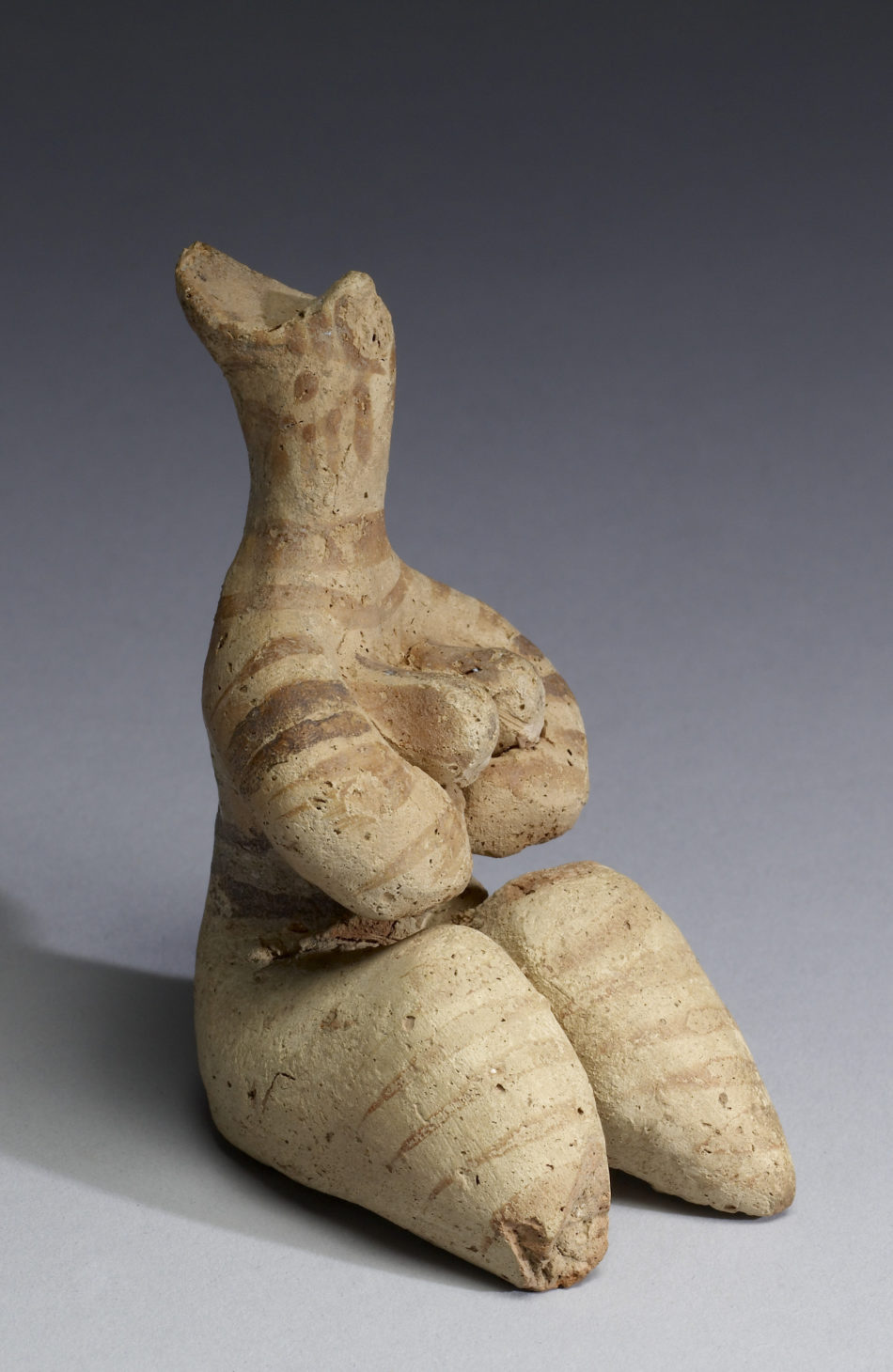 The inaugural installation at 1 West celebrates the museum’s vast collection of ceramics. Pieces from all over the world and across seven centuries are displayed together. Showcased are both the oldest object in The Walters collection—a 7,000-year-old ceramic figure from what is now Syria—and one of the newest—an abstract white sculpture titled “Seraphim” from 2015. One room is dedicated to the color red, with various forms of scarlet on display in red clay, red glass, and red glaze. The conservators curated a room devoted to the making, breaking and mending of ceramics, which includes two video installations by Maryland Institute College of Art faculty and students artfully showing the creation and conservation processes. In a hallway is a community art piece by Herb Massie that includes more than 200 plates decorated with personal messages by Baltimore residents.

What’s especially wonderful about 1 West and The Walters are the special events that are open to the public for visitors to get an even richer experience with the collection and the place’s history. Plan a visit around the following events for a unique take of the art and stories of 1 West. While many of the events are free, they all require registration to reserve a space.

Presented in collaboration with the Baltimore Museum of Industry, Dean Kimmel will lead a presentation in the newly renovated double parlor at 1 West Mount Vernon Place of the history of Baltimore’s public markets, from the 19th century to the present.

Eric Gordon, Head of Painting Conservation, and Meg Craft, Head of Objects Conservation, will discuss the changes in the mahogany library’s architecture over time and the discoveries they made within its walls. Learn about the painstaking conservation efforts they used to bring the space back to its 19th-century splendor.

1 West: A Seat at the Table

Ceramics artist Roberto Lugo will investigate the history and context of social interactions in the 19th century through the lens of his new installation in 1 West Mount Vernon Place. He will be joined by artist Ezenwa “Shane” Wosu in a participatory performance piece and explore the question of “Who gets a seat at the table?”

Lynley Herbert, Assistant Curator of Rare Books and Manuscripts, will speak about some of the interesting books on view in the newly renovated library at 1 West Mount Vernon Place. Following her talk, learn how to make a bound book inspired by the collection with instructor, Kelly Laughlin. Registrants are supplied with all necessary materials and receive one free drink ticket, valid at the Museum Cafe. $25 for members, $35 for non-members.