Emily Wilson's Translation of The Odyssey 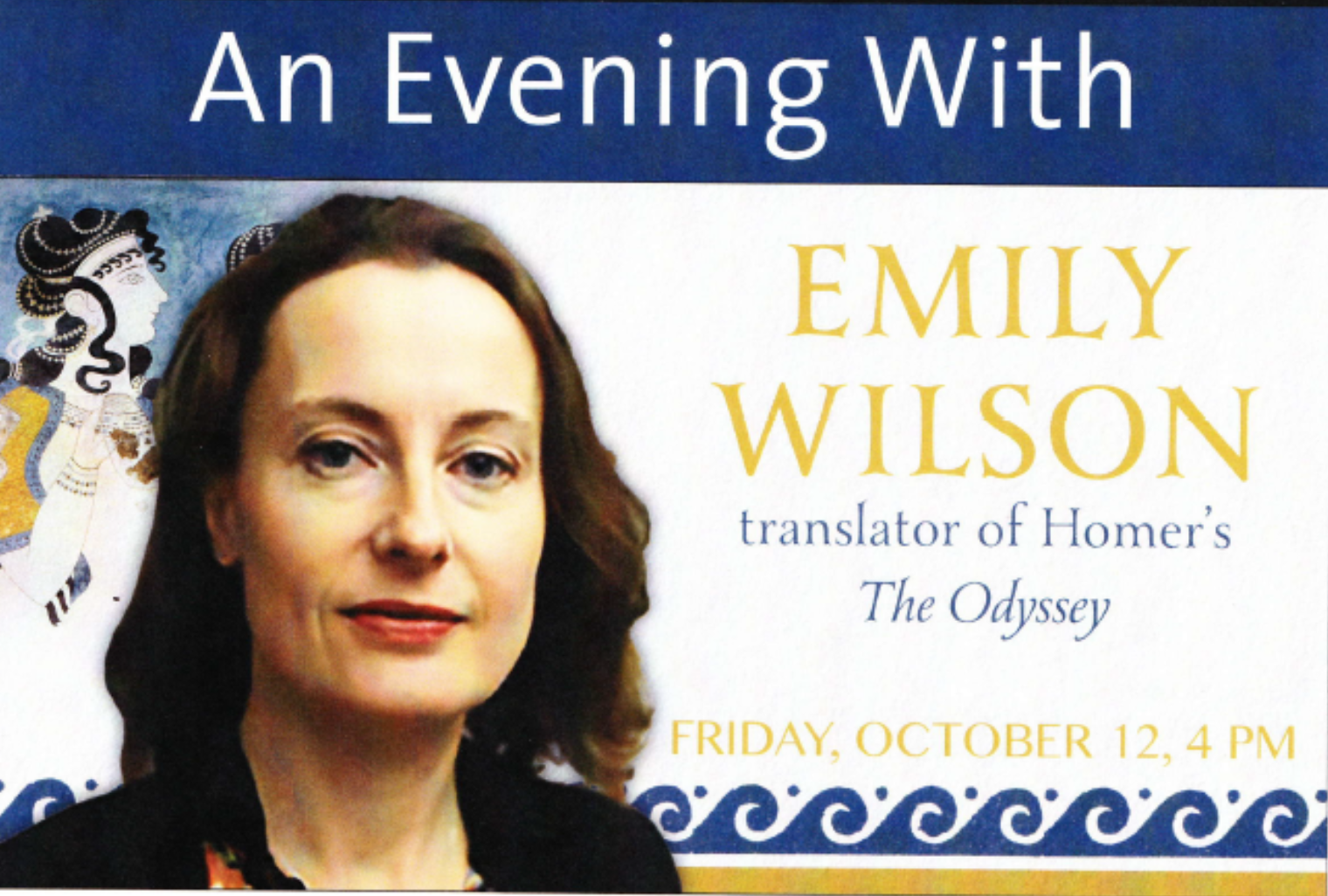 Maybe The Odyssey was required reading that you slogged through in high school, cribbing from SparkNotes to finish your homework, or maybe you dove in and relished it, the repetition and epithets and dramatic tension all still fresh in your mind. Whatever side with which you align, you will likely get a lot out of classicist Emily Wilson’s new translation of the poem, published late last fall to rave reviews. See, for example, Annalisa Quinn’s punchy argument about it for NPR: “Wilson's project is basically a progressive one: to scrape away all the centuries of verbal and ideological buildup — the Christianizing (Homer predates Christianity), the nostalgia, the added sexism (the epics are sexist enough as they are), and the Victorian euphemisms — to reveal something fresh and clean.”

Reading about Wilson’s markedly more readable, “simplified” translation gave writer and independent consultant Amy Bernstein the idea to bring the book into Maryland schools. “I was really gripped by the power and presence of what [Wilson] had done with the ancient Greek text, to make it so lyrical and so relevant and so accessible,” Bernstein says.

She then tasked herself to secure funding for a pilot program called the Maryland Odyssey Project, which currently supplies copies of the new translation to students in four Maryland high schools or high school programs: City Neighbors High School and Bard Early College High School in Baltimore City, George Washington Carver Center for Arts & Technology in Baltimore County, and the Anne Arundel Performing & Visual Arts after-school program for high school students in Anne Arundel County. As they read this translation of The Odyssey throughout the school year, the students will respond to Wilson’s text — through mostly creative means like theatre and song, and possibly writing and visual art.

Raising the Maryland Odyssey Project’s profile, Bernstein also managed to bring Wilson, Professor of Classics at the University of Pennsylvania, to Baltimore for conversation and a Q&A with four local scholars and educators at the Govans branch of the Enoch Pratt Free Library on Friday, October 12, from 4 to 6 p.m. It’s free and open to the public.

She’s hopeful that Wilson’s translation will make it into more schools, whether the Maryland Odyssey Project can acquire more funding or school districts take the initiative. Doing so would “[give] a new generation of kids an accessible and really compelling way into this story which has a lot of interesting resonance for our time,” Bernstein says.

In the 10-page translator’s note, following an 80-odd-page introduction, Wilson explains her methodology and style and some of her reasoning for updating the classic. Originally written in dactylic hexameter, the poem’s previous translations failed to give the poem a “regular line beat.” Her version uses the more widely familiar iambic pentameter — “the conventional meter for regular English narrative verse — the rhythm of Chaucer, Shakespeare, Milton,” et al. “The Odyssey is a poem, and it needs to have a predictable and distinctive rhythm that can be easily heard when the text is read out loud,” she writes.

Wilson has also tried to make the work more accessible by peeling away the “grand, ornate, rhetorically elevated English” that has weighted down previous translations. “Impressive displays of rhetoric and linguistic force are a good way to seem important and invite a particular kind of admiration, but they tend to silence dissent and discourage deeper modes of engagement,” she writes. She also does away with the sexist and imprecise language that other translations are guilty of — the domestic slaves in Odysseus’s household, for example, aren’t free maids or servants as other translations seem to suggest. Wilson’s version refers to them typically as “slaves,” stemming from “[t]he need to acknowledge the fact and the horror of slavery, and to mark the fact that the idealized society depicted in the poem is one where slavery is shockingly taken for granted.”

Moreover, through an ostensibly more “simplified” translation, Wilson tries to show the many-sided humanity of the characters and their predicaments — encouraging her readers to relate. “I fell in love with her first sentence,” Bernstein says, “and I've just never fallen out of love: ‘Tell me about a complicated man.’”