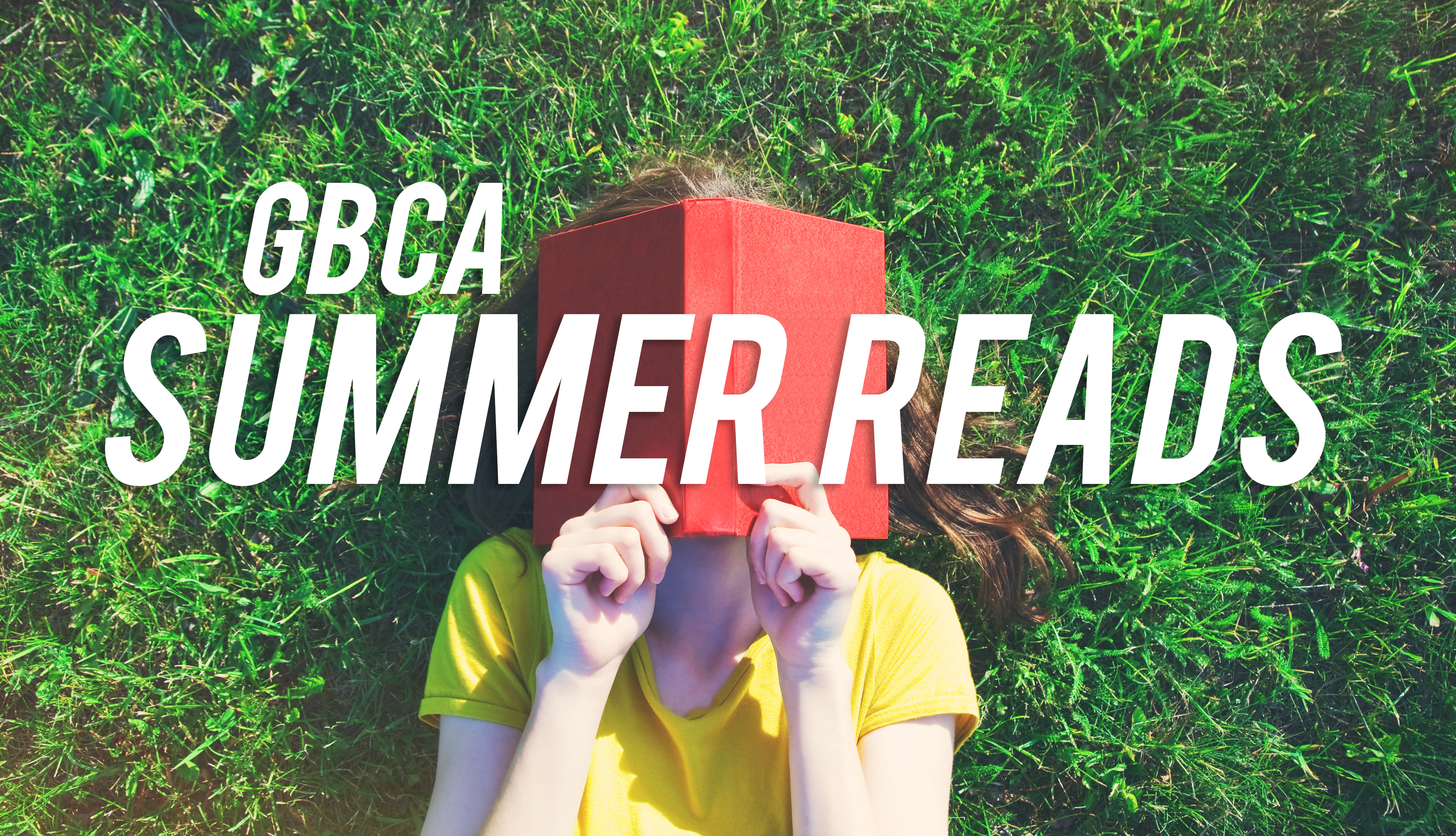 Have you started your summer reading, yet? Check out some of the eclectic titles on the lists of GBCA staff!

White Fragility: Why it’s so Hard for White People to Talk About Racism by Robin DiAngelo

In this “vital, necessary, and beautiful book” (Michael Eric Dyson), antiracist educator Robin DiAngelo deftly illuminates the phenomenon of white fragility and “allows us to understand racism as a practice not restricted to ‘bad people’ (Claudia Rankine). Referring to the defensive moves that white people make when challenged racially, white fragility is characterized by emotions such as anger, fear, and guilt, and by behaviors including argumentation and silence. These behaviors, in turn, function to reinstate white racial equilibrium and prevent any meaningful cross-racial dialogue. In this in-depth exploration, DiAngelo examines how white fragility develops, how it protects racial inequality, and what we can do to engage more constructively.

The first great novel to imagine time travel, H. G. Wells’s The Time Machine (1895) follows its narrator on an incredible journey that takes him eventually to the earth’s last moments. When a Victorian scientist invents a machine that allows him to travel to the year A.D. 802,701, he encounters a highly evolved society of people called Eloi, for whom suffering has apparently been replaced by refinement and harmony. First impressions are misleading, however, and his discovery of the Eloi’s true relationship to the brutish Morlocks who lurk in tunnels beneath them leads him to a horrifying insight into the fate of mankind and its roots in his own time.

As we move from the Information Age to the Intuition Age, we need new methods for navigating in an accelerating world. Frequency is the seminal book on living in an energy-based reality--and it provides a reassuring, step-by-step roadmap into a positive state of awareness. Inside us and everywhere around us, life is vibrating. In fact, each of us has a personal vibration that accurately communicates who we are to the world and helps shape our reality. Frequency shows us how to feel our personal vibration or "home frequency," improve it, and stabilize it as our new normal.

The astonishing untold history of America’s first black millionaires—former slaves who endured incredible challenges to amass and maintain their wealth for a century, from the Jacksonian period to the Roaring Twenties—self-made entrepreneurs whose unknown success mirrored that of American business heroes such as Henry Ford, John D. Rockefeller, and Thomas Edison. Between the years of 1830 and 1927, as the last generation of blacks born into slavery was reaching maturity, a small group of smart, tenacious, and daring men and women broke new ground to attain the highest levels of financial success.

By 2021, the World War has killed millions, driving entire species into extinction and sending mankind off-planet. Those who remain covet any living creature, and for people who can’t afford one, companies built incredibly realistic simulacra: horses, birds, cats, sheep. They’ve even built humans. Immigrants to Mars receive androids so sophisticated they are indistinguishable from true men or women. Fearful of the havoc these artificial humans can wreak, the government bans them from Earth. Driven into hiding, unauthorized androids live among human beings, undetected. Rick Deckard, an officially sanctioned bounty hunter, is commissioned to find rogue androids and “retire” them. But when cornered, androids fight back—with lethal force.

Slaughterhouse-Five, an American classic, is one of the world’s great antiwar books. Centering on the infamous firebombing of Dresden, Billy Pilgrim’s odyssey through time reflects the mythic journey of our own fractured lives as we search for meaning in what we fear most.

Philosopher, Broadway headliner, fighter, felon—Mike Tyson has defied stereotypes, expectations, and a lot of conventional wisdom during his three decades in the public eye. Bullied as a boy in the toughest, poorest neighborhood in Brooklyn, Tyson grew up to become one of the most ferocious boxers of all time—and the youngest heavyweight champion ever. But his brilliance in the ring was often compromised by reckless behavior. Yet—even after hitting rock bottom—the man who once admitted being addicted “to everything” fought his way back, achieving triumphant success as an actor and newfound happiness and stability as a father and husband. Brutal, honest, raw, and often hilarious, Undisputed Truth is the singular journey of an inspiring American original.

Renz Balagtas Staff Pick:
Mycelium Running: How Mushrooms Can Help Save the World by Paul Stamets

Mycelium Running is a manual for the mycological rescue of the planet. That’s right: growing more mushrooms may be the best thing we can do to save the environment, and in this groundbreaking text from mushroom expert Paul Stamets, you’ll find out how. In this comprehensive guide, you’ll find chapters detailing each of these four exciting branches of what Stamets has coined “mycorestoration,” as well as chapters on the medicinal and nutritional properties of mushrooms, inoculation methods, log and stump culture, and species selection for various environmental purposes. Heavily referenced and beautifully illustrated, this book is destined to be a classic reference for bemushroomed generations to come.

In the summer of 1953, two eleven-year-old boys—best friends—are playing in a Little League baseball game in Gravesend, New Hampshire. One of the boys hits a foul ball that kills the other boy's mother. The boy who hits the ball doesn't believe in accidents; Owen Meany believes he is God's instrument. What happens to Owen after that 1953 foul ball is extraordinary.

According to The Nice and Accurate Prophecies of Agnes Nutter, Witch (the world's only completely accurate book of prophecies, written in 1655, before she exploded), the world will end on a Saturday. Next Saturday, in fact. Just before dinner. So the armies of Good and Evil are amassing, Atlantis is rising, frogs are falling, tempers are flaring. Everything appears to be going according to Divine Plan. Except a somewhat fussy angel and a fast-living demon—both of whom have lived amongst Earth's mortals since The Beginning and have grown rather fond of the lifestyle—are not actually looking forward to the coming Rapture. And someone seems to have misplaced the Antichrist . . .