Inside the Rubys: Carl Grubbs 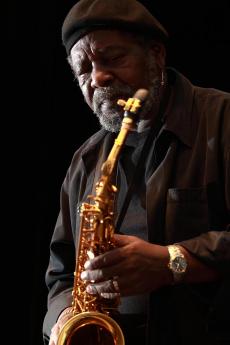 Carl Grubbs an internationally renowned jazz saxophonist who has been recognized numerous times for his distinguished musical career (including a 2009 Mary Sawyers Baker Prize). Carl, along with his wife, Barbara, founded Contemporary Arts, Inc. 15 years ago to provide meaningful and accessible music experiences to Baltimore youth. Carl received a Rubys grant to support the writing and arranging of new compositions for Inner Harbor Suite Revisited, a musical love letter to the city of Baltimore featuring saxophones, strings, group improvisation, and ensemble performance. Carl will debut this piece on May 31 at the Ward Center for the Arts.

Carl Grubbs: I have lived in Baltimore since August 1980 and I moved here because of, in a word, love. In 1976, my brother Earl and I were invited to perform at Coppin State for a concert “Tribute to Coltrane.” At a breakfast event prior to the concert, I met a young woman named Barbara. We long distance dated for four years, with me in Philly and Barbara in Baltimore. We married at the Towson courthouse in April 1980 and I had moved permanently to Baltimore by that August.

GBCA: How has living in Baltimore shaped your music, if at all?

Carl Grubbs: Living in Baltimore has helped to bring out, develop, and grow my music in my writing, composing, and performance. The Baltimore jazz scene is a quieter community, which for me is a good thing, as the breathing room gives me a chance to look within to find out what I really hear. My musical creativity has matured since living in Baltimore. I have the space to stretch out and open up. I find that my writing and composition is more emotional and deeply rooted to represent the community I live in.

GBCA: What is unique about the Baltimore jazz scene?

GBCA: What advice would you give an aspiring jazz musician?

Carl Grubbs: I would tell them to get out and play with as many other musicians and to listen to as much and all sorts of jazz as possible. In order to understand jazz, you have to emulate what the masters have played. Then, taking the master’s knowledge, you look within yourself to find some new musical things that are possible.

GBCA: Tell us about how the Inner Harbor Suite, with its musical fusion, developed?

Carl Grubbs: I originally wrote Inner Harbor Suite for piano, bass, drums, percussion, and vocals, however, the more times I played the piece, I began to hear possibilities for other instrument. I spent the last year developing the idea by adding a string section to the composition. The classical/jazz collaboration has added emotion to the piece, which I hope that anyone listening can also feel and understand.

GBCA: What is next for you after performing the Inner Harbor Suite?

Carl Grubbs: I’m going to continue to compose and develop works that incorporate strings and other non-traditional jazz instruments, such as tablas and sitars.