‘I Decree I Be Free’: The Frederick Douglass Bicentennial featuring the art of Ed Towles 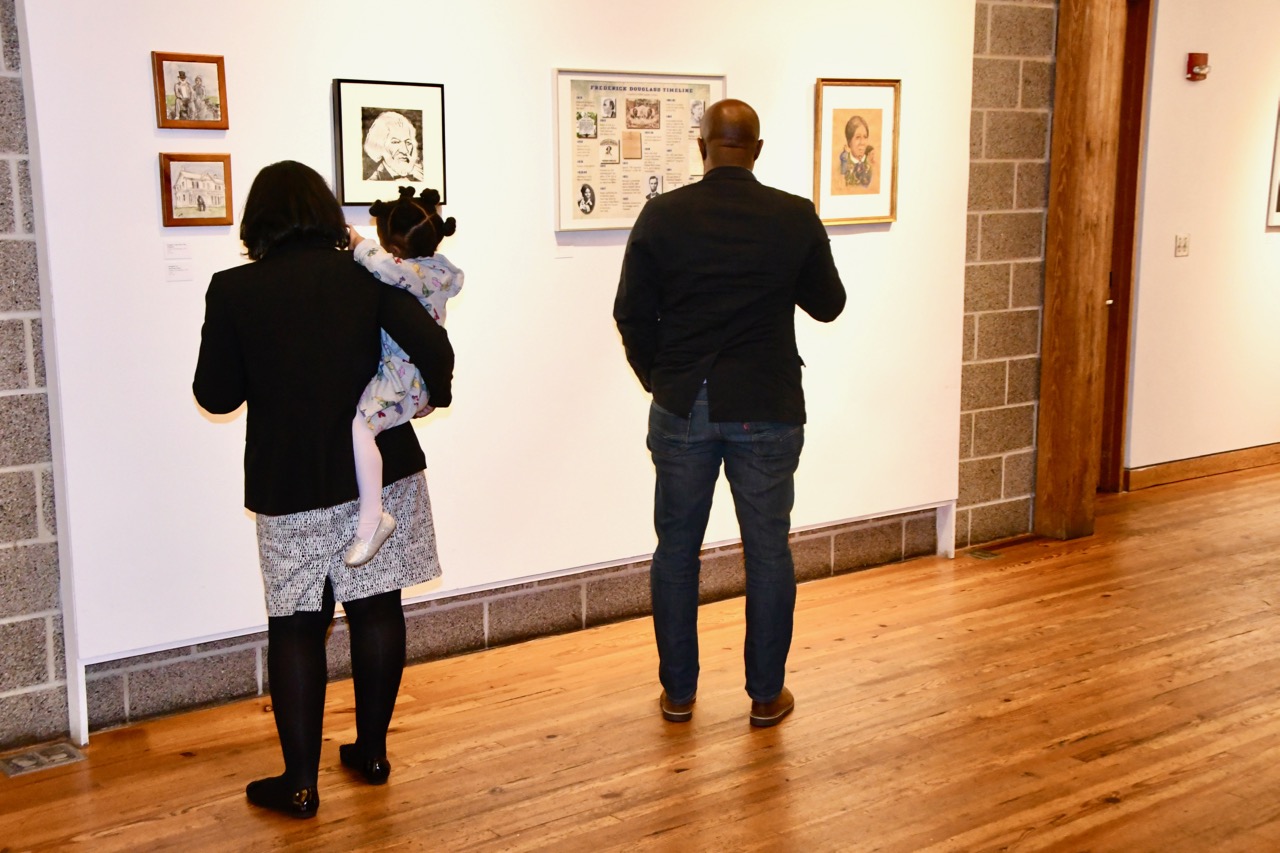 In a linoleum block print, Frederick Douglass appears the way you’ve seen him many times, a three-quarter portrait, with pillowy hair and beard, a stern and resolute look in his eyes. In another piece, there’s a high-contrast, blaxploitation-style, suit-and-bowtie Frederick Douglass, digitally drawn against an American flag and a number of keywords for his life’s work: anti-slavery, abolition, author, freedom, lecturer, justice. In yet another, Frederick Douglass rests on a chair in front of a grand house, painted in watercolor on a small ceramic tile framed by wood—like a trivet, for pots still hot from the stove.

These are only a few ways you’ll encounter Baltimore artist Ed Towles’s representations of Douglass in the show The Frederick Douglass Bicentennial, on display at the Frederick Douglass–Isaac Myers Maritime Museum through February 2019. Curated by Kibibi Ajanku (GBCA’s Equity and Inclusion Manager), the show uses Towles’s art “as a lens to envision an expansive road to freedom”—and to honor the two-hundredth anniversary of Frederick Douglass’s birth. 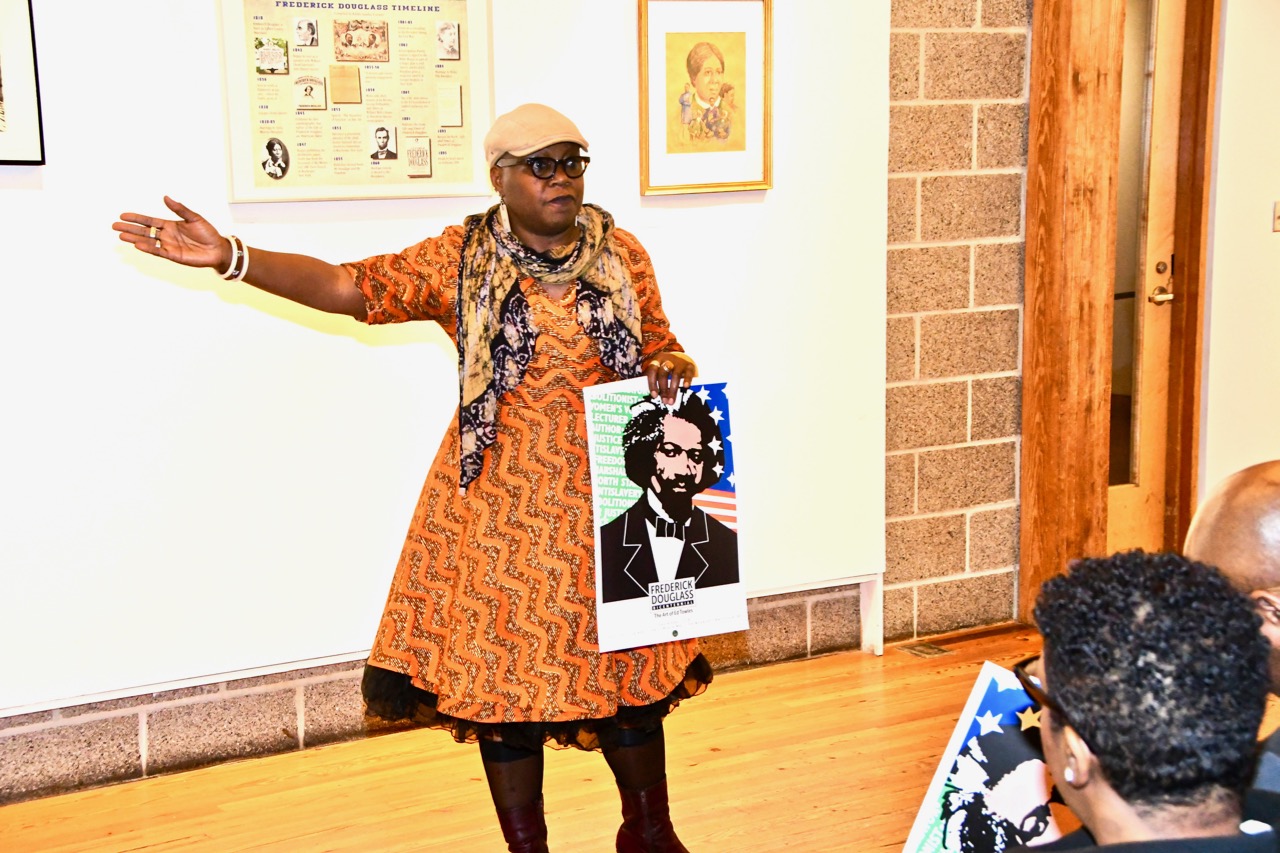 At the exhibit’s opening, writer and collaborator Sharon Fitzgerald spoke briefly about Douglass’s status as an icon and how he truly deserves that label (despite its overuse), and shared a passage Douglass wrote about his youthful yearning to become literate. Born into slavery in Eastern Maryland, Douglass was sent to the Auld family in Baltimore as a child; Sophia Auld, the mistress, started teaching Douglass the alphabet. Hugh Auld, Sophia’s husband, was not pleased to discover this, considering the “threat” it might pose to them, his masters. That literacy could be a step toward his own liberation was an invaluable lesson for Douglass, who craved knowledge and eventually got free and, among many other things, went down as one of the best orators that ever lived.

When Towles got up to speak about his work, he recalled a phone conversation he’d had with Fitzgerald, who had told him something along the lines of, “You can’t do Douglass unless you tell how he got to where he was.” So he nodded to that formative moment with a colored pencil drawing which he says “set the tone” for the show, depicting Sophia Auld with the young Douglass reading. 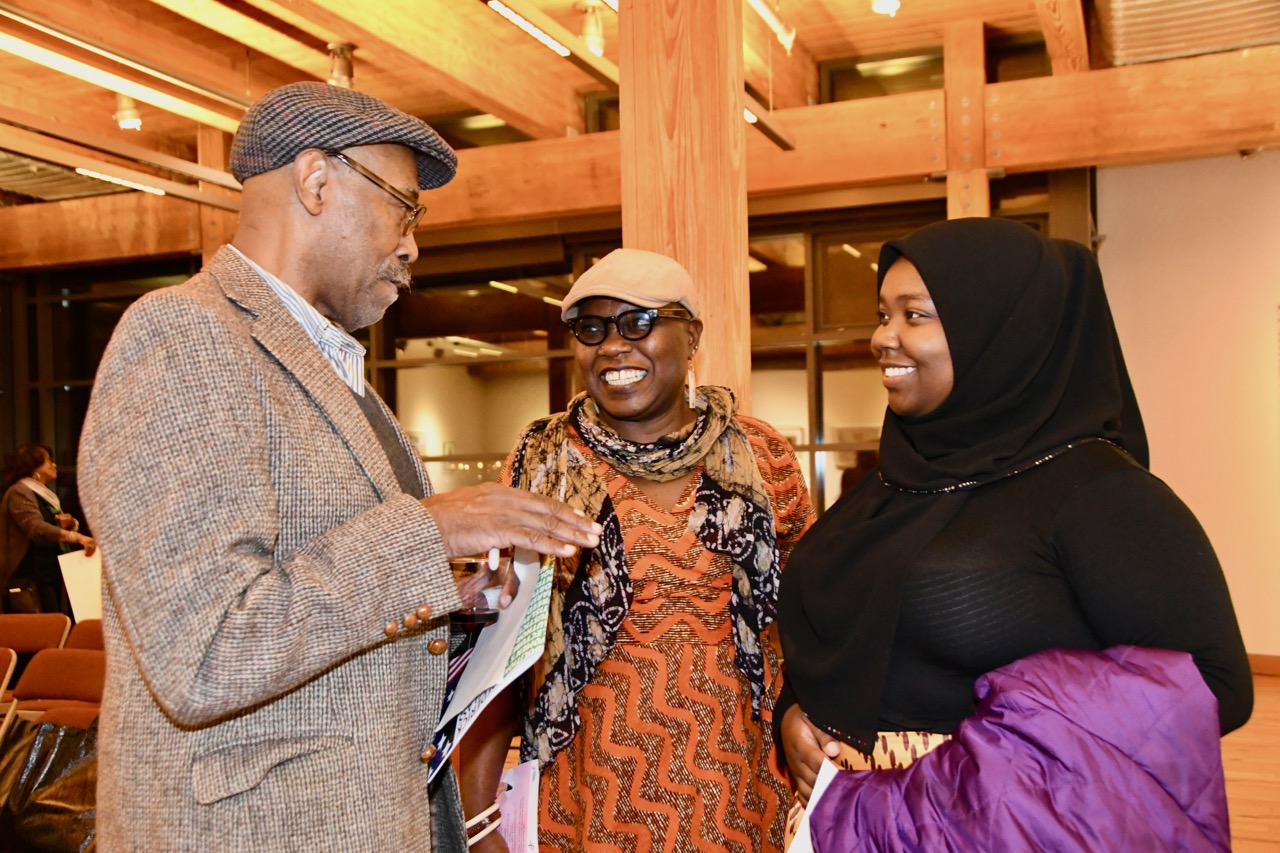 Trained as a graphic designer and illustrator, Towles wanted to find a way to represent Douglass’s life without being too literal or encyclopedic, but still adhering to the man’s well-documented story. “It’s not just creating art, it’s creating an experience as well,” Towles said. “His stories have been told so many times in so many ways. And my good friend Sharon hit me with reimagining, imagining Frederick Douglass, which is how I really saw it.”

So there are plenty of Douglass portraits, as well as portraits of his family—including his first wife, Anna Murray, a free black woman who helped him escape slavery, who reared five kids with him, and about whom comparatively little is known. There’s a Warholian digital print collage featuring Lincoln and Douglass, a small image of the White House cut-and-pasted over the portraits with simple text: “In 1864 Frederick Douglass and President Abraham Lincoln met at the White House to discuss emancipation.” A linoleum cut print of rifle-toting hero Harriet Tubman, made all the more tense by the print hanging above her which mimics an old newspaper ad and reads “$150.00 reward for runaway slaves.” 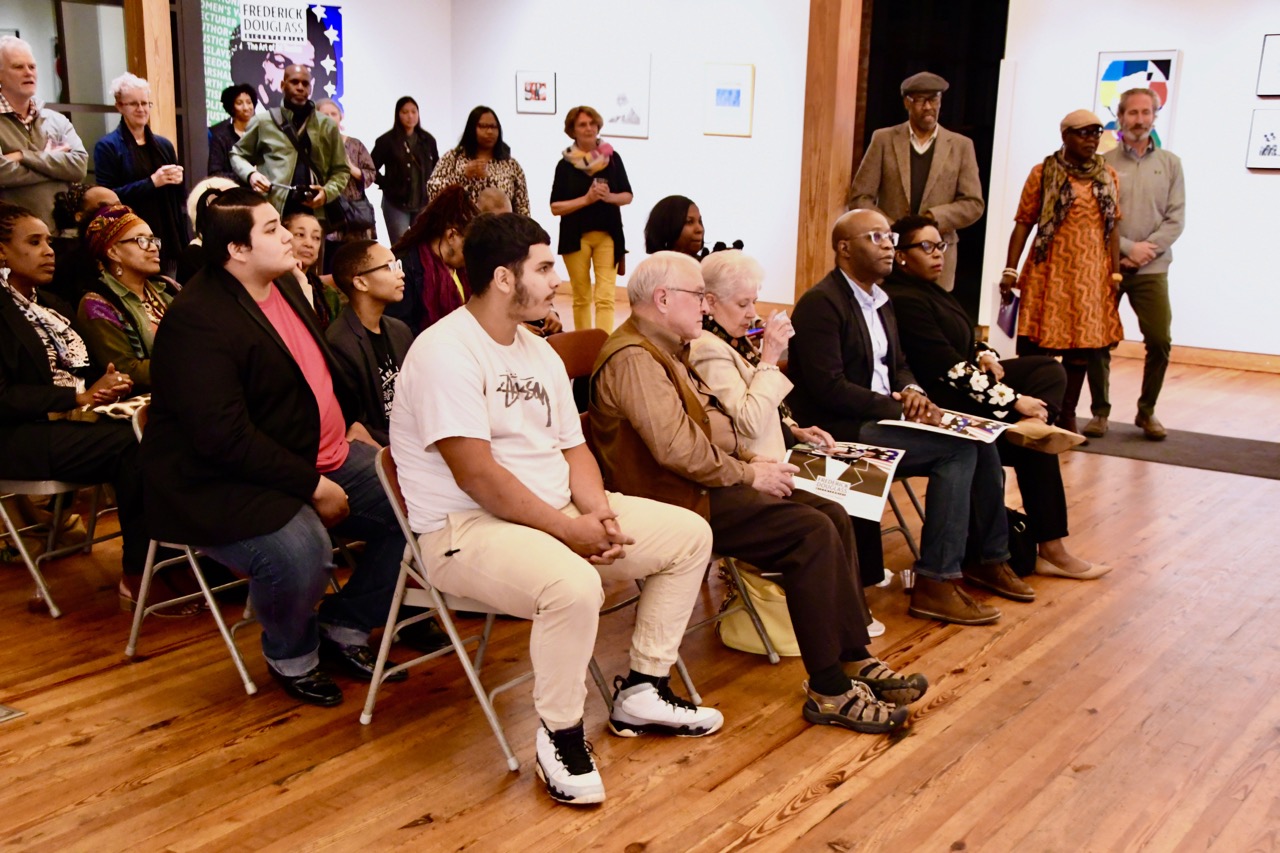 A fine drawing that Towles made around 1975 marks the artist’s first use of Douglass as a subject, with faint stippling to show the contours of Douglass’s cloudlike facial hair, cross-hatching for his suit and bowtie, and something like wood grain wavering across his self-sure face. The print also includes a quote from Douglass that likely resounded just as strongly in 1975 America as it does in 2018 America: “If there is no struggle, there is no progress. Those who profess to favor freedom and yet deprecate agitation are men who want crops without plowing up the ground. They want rain without thunder and lightning. They want the oceans without the awful roar of its many waters. Power concedes nothing without a demand. It never did and it never will … Men may not get all they pay for in the world, but they must certainly pay for all they get.” 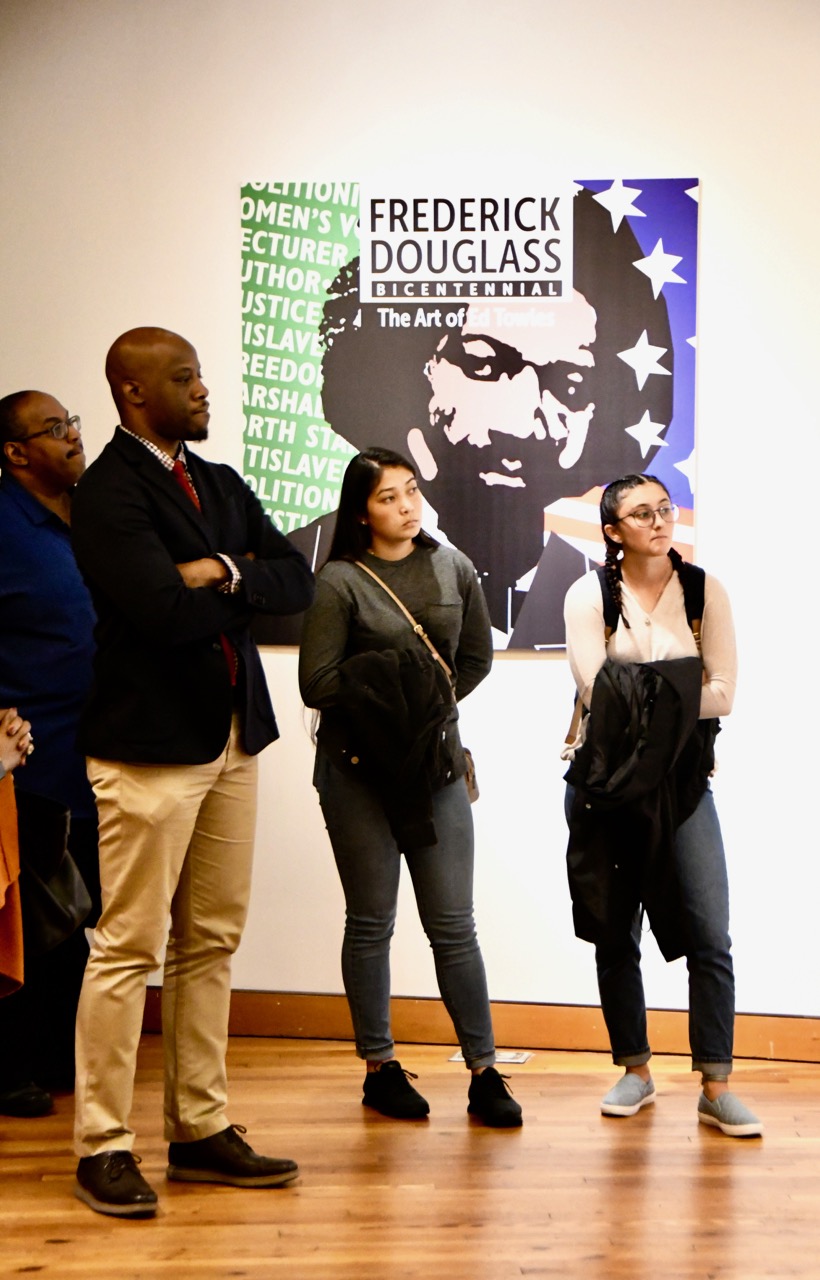 Another print from around that time, Towles’s evocative “I Decree I Be Free,” features a similarly sinewy, wood grain texture on both the figure and ground. This time, though, the subject isn’t Douglass, not literally. Against a walnut-colored background, a muscular man in a warrior pose seems just at the cusp of breaking free from the ropes that bind him. His fists are clenched, eyes focused upwards, feet on the ground—maybe even ready to run.