In a chapter from Jamaica Kincaid’s 1983 novel Annie John, the titular narrator, a teenage girl in Antigua, finds herself inexplicably ill. She’s weary, exhausted, and in and out of conscious and fugue states. Her mother calls over Dr. Stephens, who has no answers but prescribes her some medications anyways. Dissatisfied, her mother calls up the ancestral spiritual wisdom that raised her, bringing her obeah woman, Ma Jolie, to the home for advice. Ma Jolie marks crosses all over Annie John’s body, arranges incense and candles around the room, affixes a sachet to the girl’s nightgown, and leaves behind vials of fluids that the mother is to periodically rub on her daughter’s body. 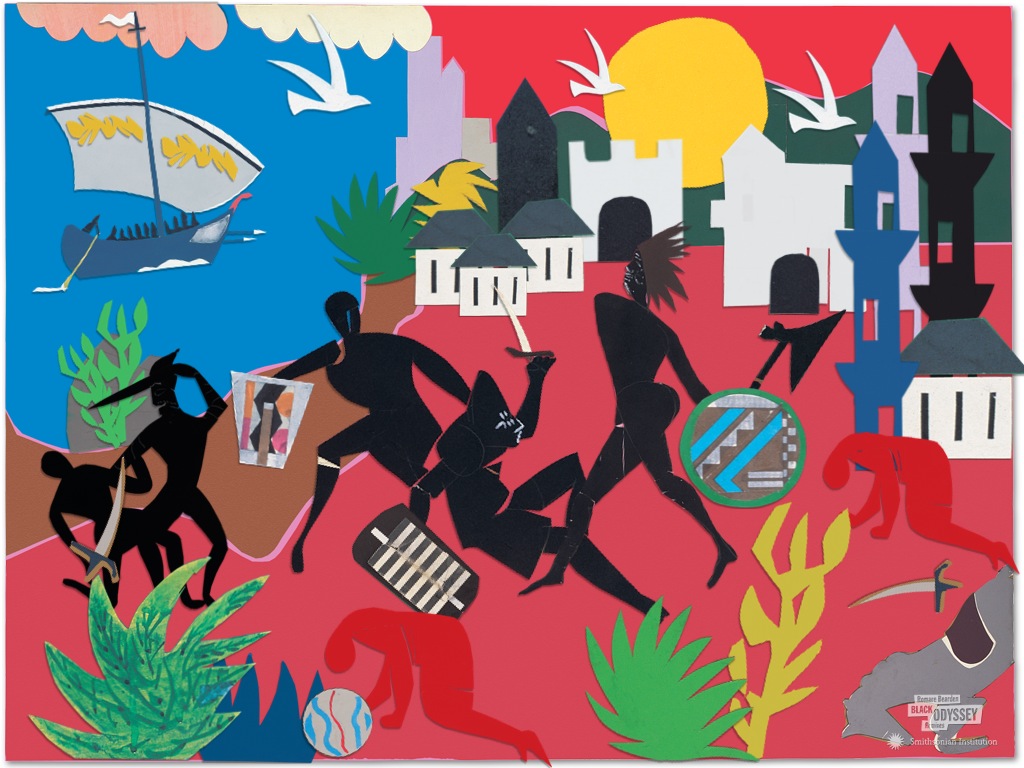 “My mother placed them on my shelf, right alongside the bottles of compounds of vitamins and purgatives that Dr. Stephens had prescribed,” narrator Annie John informs us, before reminding us that her father does not appreciate this magic stuff: “He must have said something to my mother, for she arranged the shelf in a new way, with Dr. Stephens’s prescriptions in the front and Ma Jolie’s prescriptions in the back.”

I’m still transfixed by that anecdote from Annie John, and its notes of colonialism’s creeping censure and the whitewashing of witchery; and also cannot delete from my mind the image of Romare Bearden’s “Conjur Woman,” a lithography print on display in the Reginald F. Lewis Museum of Maryland African American History and Culture exhibit Romare Bearden: Visionary Artist. Slightly off-center in the composition, the collaged woman’s dress silhouette is little more than a shaped black void. She both emerges from and recedes into the background of brambles and grasses and twigs. Her collaged face obscures her even further, except for her too-large, fuzzy eyes and too-small, delicate hand which draw her forward. Made from nature herself, the conjure woman can harness these raw materials to use as medicine or protection, just like Annie John’s obeah woman. 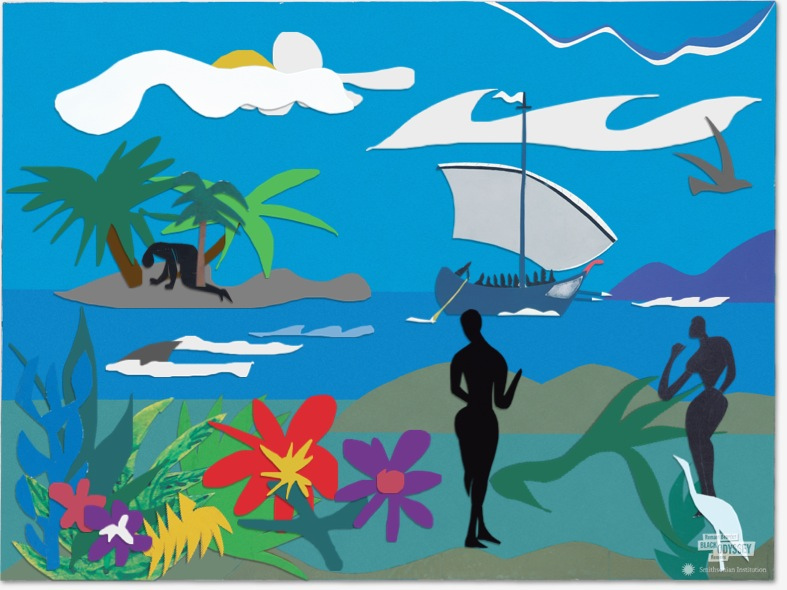 Romare Bearden: Visionary Artist, on view through March 3, 2019 with a number of concurrent programs, is organized into sections exploring various themes in Bearden’s work. A few early works show Bearden’s foundation as a social realist painter—the 1935 oil painting “Soup Kitchen,” where bundled-up men crowd around a steaming cauldron, seems to have been a reminder for the artist about his roots. As the wall text notes, the painting stayed with him throughout his life; it was also in one of his earliest shows, in Ad Bates’s Harlem studio. A popular hangout for Black artists of that time, the studio was “a hotbed for discussions about African American history and the social responsibilities of the artists.” Bearden’s time spent there was “essential to his artistic development and the social pattern he followed for the rest of his life—active involvement in the community.”

“Soup Kitchen,” though humble and visually distant from so much of Bearden’s lively, jazz-informed, cut-pasted work for which he is best known, sets the conceptual tone for the show. A series of brightly colored prints uses real and fictional excursions to channel African American history—one representing the 19th-century mutiny by captive Mende people aboard La Amistad, another based on both the novel Roots and the story of the Odyssey, another a Vuillard-like tangle of patterns that settles into a warm scene of a family gathered around a kitchen table. 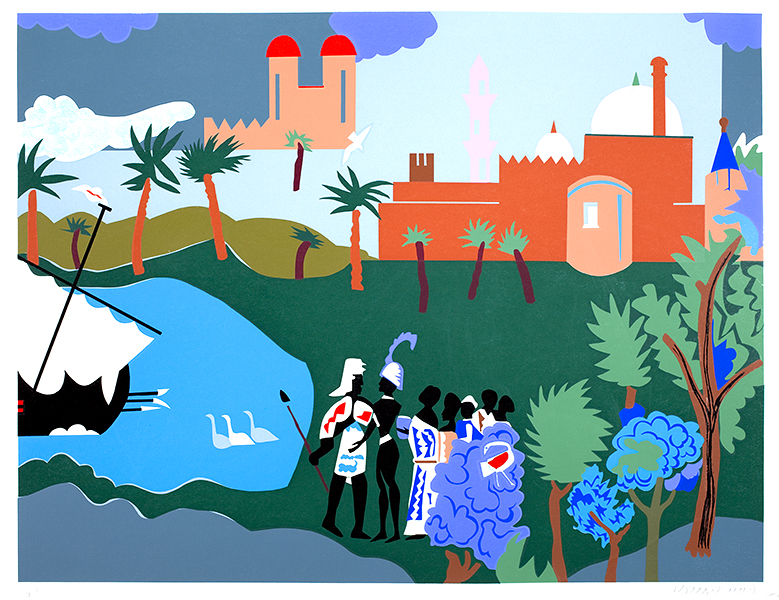 The section exploring the profound influence of music (particularly jazz) on Bearden’s art seems small in comparison to all that’s on display, but the improvisation that structures his work, like that of jazz, is evident throughout. It’s easy to catch the visual rhythms that synchronize these compositions—that highly patterned family scene finds links in the all-at-once and up-front “Baptism” collage in the nearby “myth and rituals” section, as well as in the prints featuring interior scenes and domestic memories around the corner.

In many of these domestic scenes, women dominate the image—they comfort and protect, they embody power, they lead and heal. And that entrancing “Conjur Woman,” her old and wise spirit, finds a tropical complement in a later watercolor, “Obeah with bird loa.” Here the obeah woman, created by arching lines and a mess of blood-red right in the gut, stands square with a loa bird, whose cerulean winged arm rises above the woman’s head. Her red gut and the yellow fabric of her garment bleed into his blue outlines, forming an ethereal third kind of energy between the two of them. Another mystical creature, maybe, or simply some unknowable watery, improvisational form. 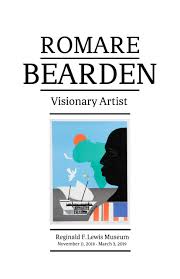