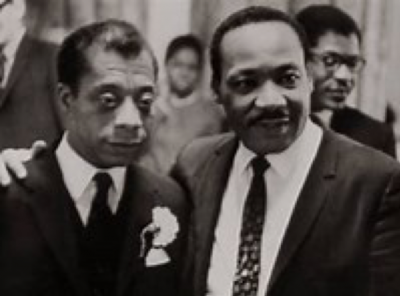 African History Month is the terminology that I prefer because I am an African born in America. That being said, while a month of intensive focus is a delightful luxury, history is not a momentary place in time. It is 24 hours, 7 days per week, and 365 days per year. History is continuous. So, to foster that concept I will quote from the past, and link to the recent, in hopes of inspiring conscientious and productive visions of the future.

During the 1960’s, James Baldwin appeared in Boston public television producer Henry Morgenthau III's "The Negro and the American Promise," alongside Martin Luther King and Malcolm X. This is a Baldwin quote from that broadcast that is as relevant today as it was then. “There are days -- this is one of them -- when you wonder what your role is in this country and what your future is in it. How, precisely, are you going to reconcile yourself to your situation here and how you are going to communicate to the vast, heedless, unthinking, cruel, white majority, that you are here? And to be here means that you can't be anywhere else.”

Recent…
The actual birthday of the late Rev. Dr. Martin Luther King Jr. was on Sunday, January 15th. On that day, in 2017, Urban Arts Leadership, celebrated the completion of its Community Mentorship Project in partnership with Save-A-Dope-Boy. Save-A-Dope-Boy is an organization that provides uplifting connections for youth in the Upton neighborhood of Baltimore City. The final meeting of the two groups was represented by a day in Washington D.C… not just any day… not just any trip.

The total group number was 44. Serendipitously, this was the number of the outgoing first Black President of the United States, Barack Obama, and this was the last week of his 2nd term in office. From its inception, the trip was ordained by definition, location, timing, and participation with a feeling of magic. The plan ensued as a train ride and a visit to the brand new, highly sought after National Museum of African American History and Culture (NAAMHC).

The day was steeped with community engagement, racial equity, inclusion, legacy, heritage, history, and pride. The entire troupe included Urban Arts Fellows represented by current Cohort and Alumni, Greater Baltimore Cultural Alliance staff, Walters Art Museum leadership, Maryland Volunteer Lawyers for the Arts, and arts trailblazers from the City of Baltimore. The entourage was an encouraging and diverse mixture of race, socio-economic backgrounds, and city neighborhoods. The “tie that binds” was a revere for and participation in art and artistry… and thus, the gathering became as important as the destination.

History is a continuum. Each day we build upon the events of the moments, the days, the months, and the years before. There is the opportunity to be positively conscientious and productively mindful as we shape the time that passes. Our collective destiny depends on our daily thoughts, words, and deeds.