Making Beautiful Music out of Broken Symphonies; A Reflection on Teaching in Baltimore City Schools

Unlike most people approaching 40 (which is the actual age I will be approaching for the next 2 decades at least), I remember the very moment I wanted to become a music teacher. It was my first day of kindergarten and at the end of a day of phonics, coloring, and songs we watched what most of us 80’s babies and older know as a “filmstrip”. The grainy images were that of a Walt Disney’s classic, “Peter and the Wolf”. It was in this Kindergarten class at Hillcrest Heights Elementary School that I fell in love with the orchestra. With each “beep” of the film-strip the musical themes spoke to me like the words in a good Disney book bound with a golden seal. It was classical orchestral music. I was eventually overtaken by emotion and stood up in my seat, closed my eyes and began to conduct, pencil in hand. Music became my passion after class when my teacher whispered in my ear,

“You will be a great conductor one day.”

As an inner-city music teacher of over 10 years, I've learned how to masterfully conduct my way through broken symphonies of block-scheduling (the destroyer of Arts Education), annual BCPSS budget crisis, and weekly stories from “Project Baltimore” covering everything negative about Baltimore City Schools from 40-degree classrooms, student safety, and political corruption.

Teaching in today’s world is learning to conduct these broken symphonies and transforming them into beautiful music that often only you the teacher, students, and few others that choose to tune in can hear. Too often “the suits”, those in power, only seem to acknowledge and move to the music of the latest and greatest songs in the album I call, “The Standardized Testing Machine”. In the push for “better” academically prepared students, subjects like music and other art forms have been left too often on the cutting room floor. Standardized testing, data-driven-instruction, and academic rigor have become education pop culture bops and as a result, Arts Education has suffered a great loss in creativity, innovation, and critical thinking.

A lack of adequate funding and disproportionate opportunities for struggling schools of the Urban Public-School Systems is a musical suite that seems to have fallen upon deaf ears. 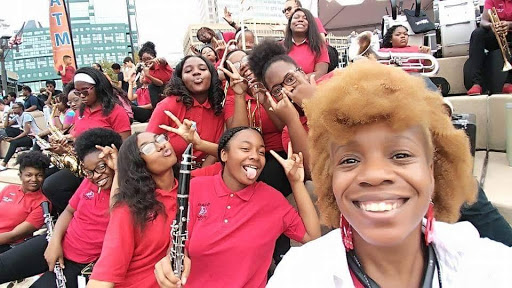 Western High School has a motto "Lucem Accepimus, Lucem Demus” or "We have received light; let us give forth light." That light was given to me by a teacher that understood that self-expression and orchestral music was just as important as learning phonics and recognizing patterns for low-income students. Recently Monica Greene, Poly Senior band student, was given the opportunity to write, arrange, and conduct a song for the marching band at homecoming. The Poly-City Game (or for you City College Alumni the City- Poly Game) was her “light” to self- expression, creativity, and leadership. These skills shape us into successful adults and transcend the inequities that plague urban education. Schools Systems and teachers need adequate funding and fair wages to create more Monica’s in society.

It was not until this year’s Kirwan Commission Report 2019 that I felt “Finally! The Suits are listening!” Now we all are tuned in to the decades of unfair funding especially for those who need it the most. Educators shouldn’t have to MacGyver our way to success. The budgeting now can support services that are needed. The Kirwan Report supports developing students who can lead and move society from dreams to reality. The music educators should be conducting creates students who can innovate and lead. My husband’s music fraternity, Phi Mu Alpha Sinfonia has a saying called “Ode” that perfectly summarizes that innovation and hope for the future.

“We are the music-makers”

“We are the dreamers of dreams”