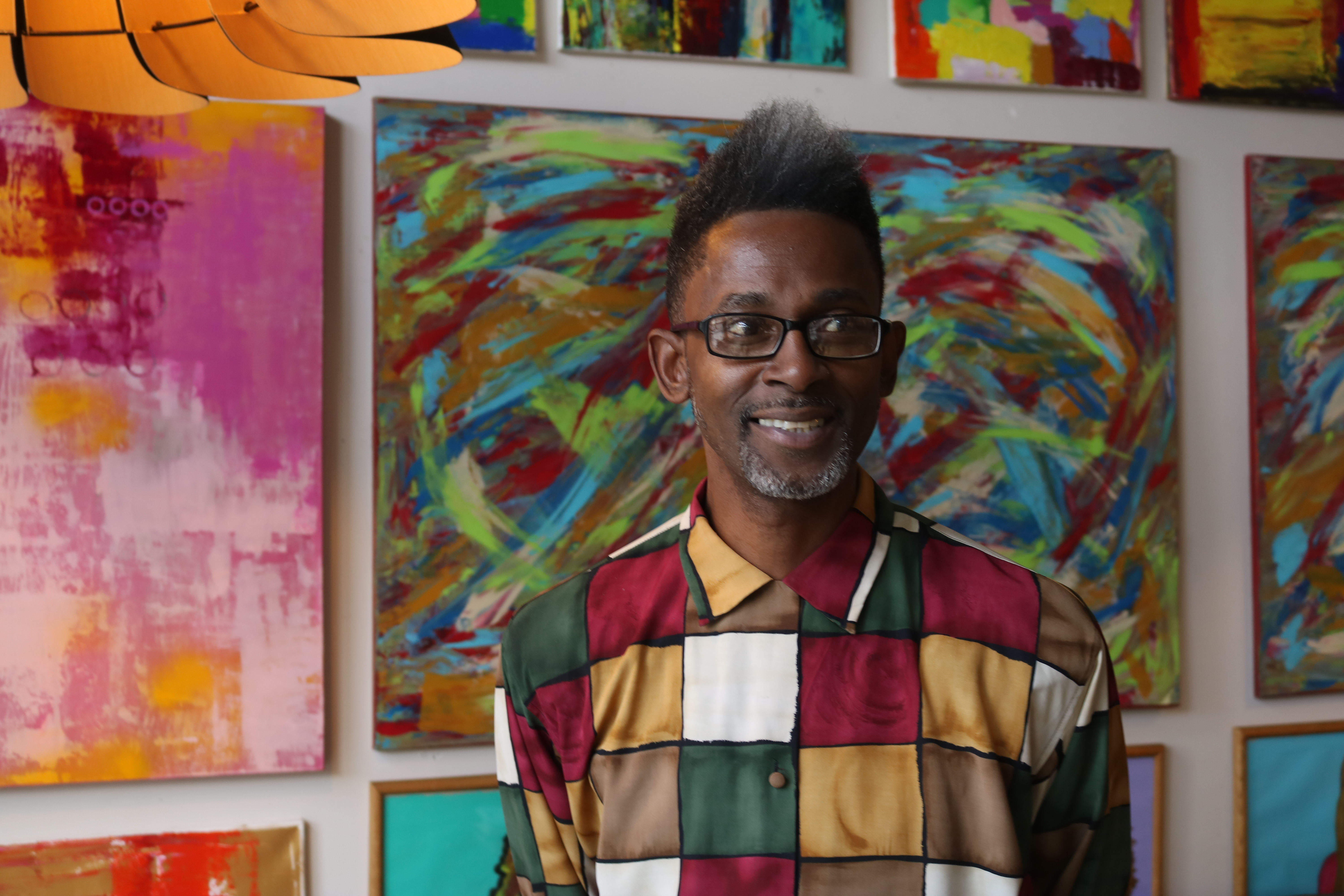 This week I had the honor of sitting down to chat with the legendary staple of Station North, affectionately known as “Downtown” Kevin Brown the co-owner and head chef of Nancy by SNAC. If you have not met Kevin, put it on your to-do list because he is always warm and welcoming, and is such an incredible person to talk to. Working at the Greater Baltimore Cultural Alliance, right across the street from Nancy by SNAC, I knew I needed to eat there at some point, so a few weeks ago I got lunch there with my partner -which was delicious- and I was taken aback by the explosion of color, art, and life covering every inch of the walls. When I returned to interview Kevin not only did he remember me from my one visit, but he also remembered exactly where my partner and I were sitting! During our chat, we talked about everything from the Station North Arts District, to our opinions on cats (I like them, he does not), to his personal artistic influences. I think I could meet with Kevin every day and he would still have something new and interesting to talk about. 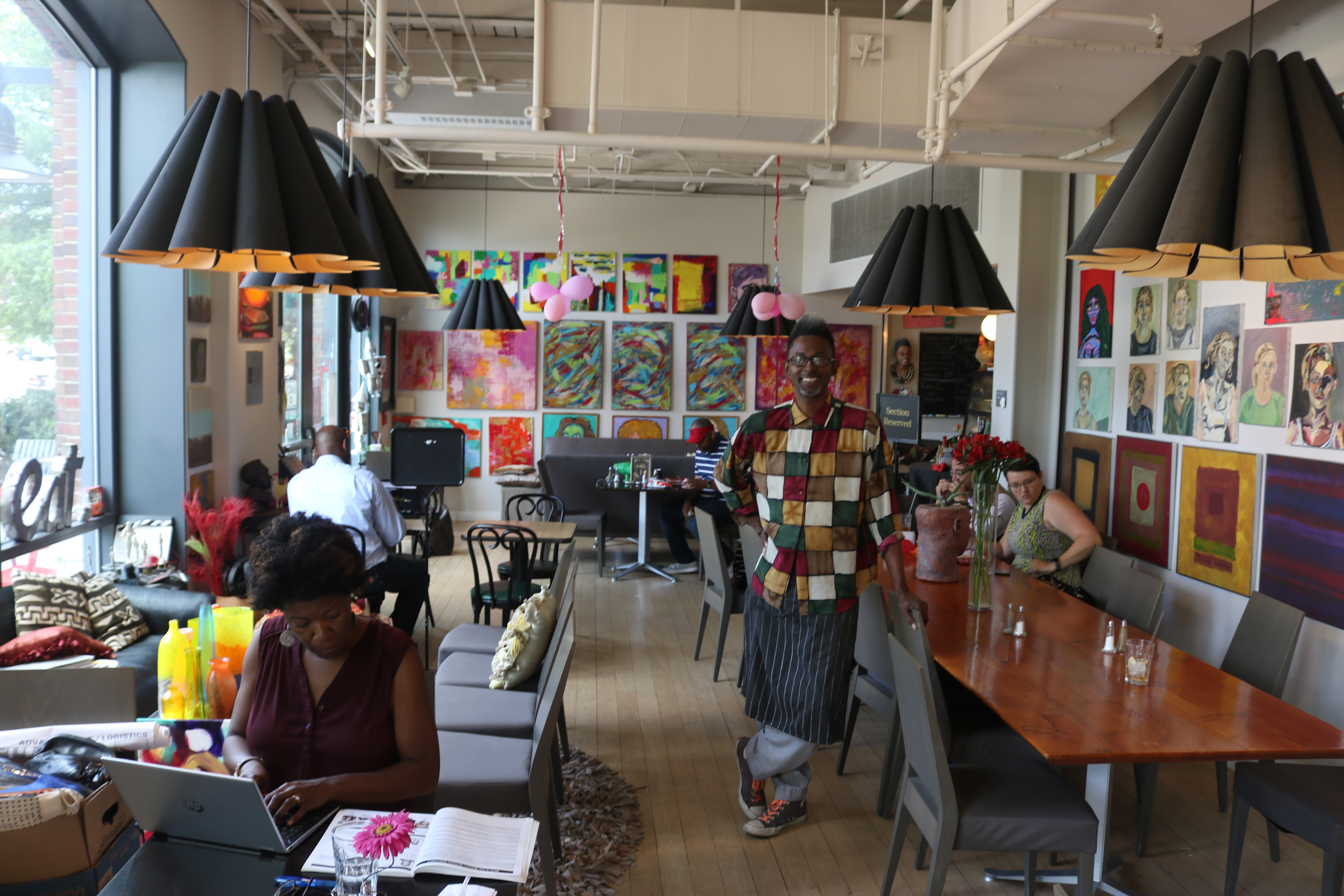 Over lunch, Kevin told me about his fascinating journey getting to where he is now. He was born and raised in West Baltimore and moved to Station North about 25 years ago. He studied Communications and Theater at Stevenson University and eventually worked as a reporter at the Baltimore Sun for almost 13 years. Later, he became an editor for the Afro and even had a television segment called “Around Town with Kevin Brown.” Every Friday he would go on the 5 O’clock news and tell people where to go and highlight the most exciting events that weekend. He was working as a writer for the Baltimore City Housing Department and Community Development and the Housing Authority when, in 2005, Kevin and his partner William “Bill” Maughlin opened Station North Arts Cafe (SNAC) on Charles Street in Baltimore. 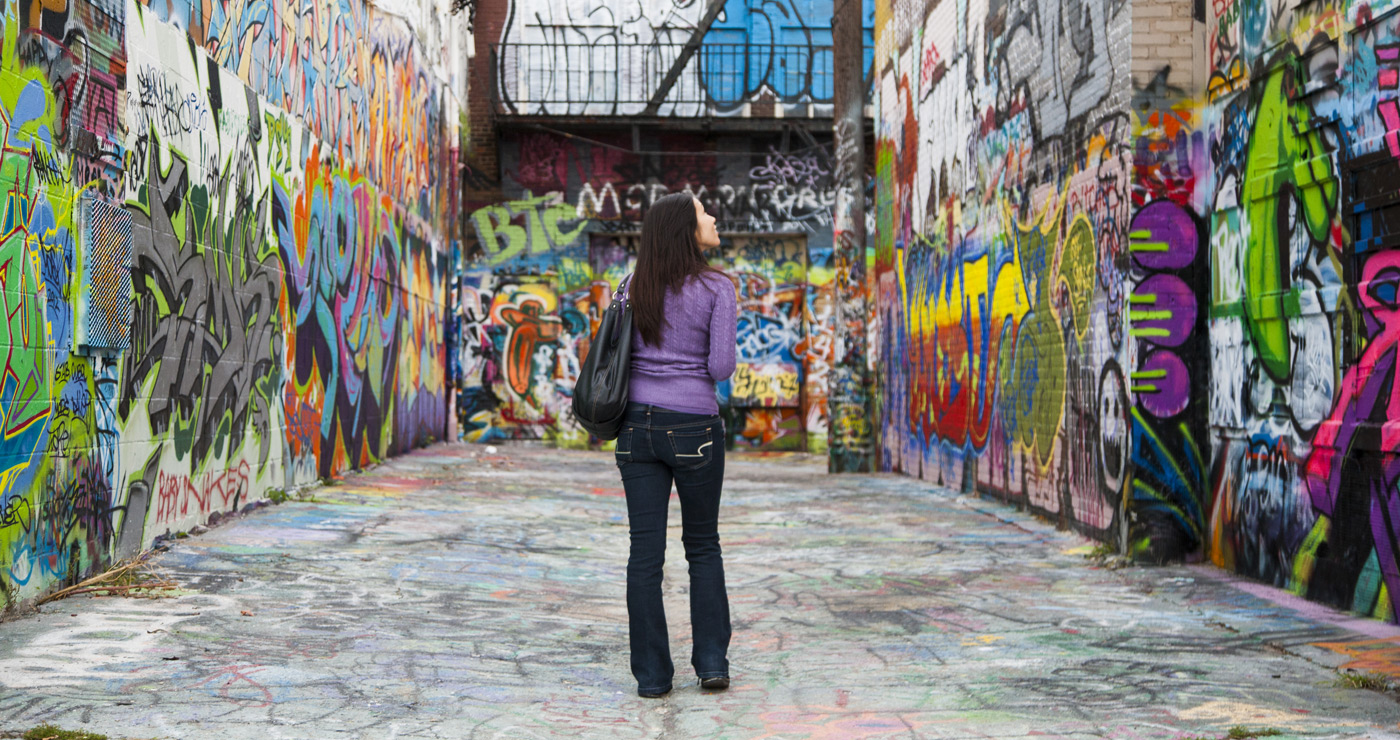 Kevin has served on the Board of Directors for Station North Arts for the past 11 years, and during this time he met and became close friends with founding GBCA Executive Director Nancy Harrigan. Kevin and Nancy bonded over their mutual love for Station North, and the art community that had organically grown here. Kevin said, “The difference between the Station North Arts District and other arts districts in Baltimore, is that the artists were already here, they weren’t incentivized to move here.” Nancy passed away in 2011 but inspired him with her vigor in networking with art nonprofits to create better opportunities for underprivileged youth, and efforts to build up the art community collectively. “Nancy Harrigan is an incredibly divine person who is very near and dear to me, I miss her everyday,” he said. Shortly after her passing, Maryland Institute College of Art asked Kevin and Bill if they would turn Nancy’s old office in their Graduate Studies building into a cafe, and after much deliberation, they decided to accept the offer and named the café in her honor. 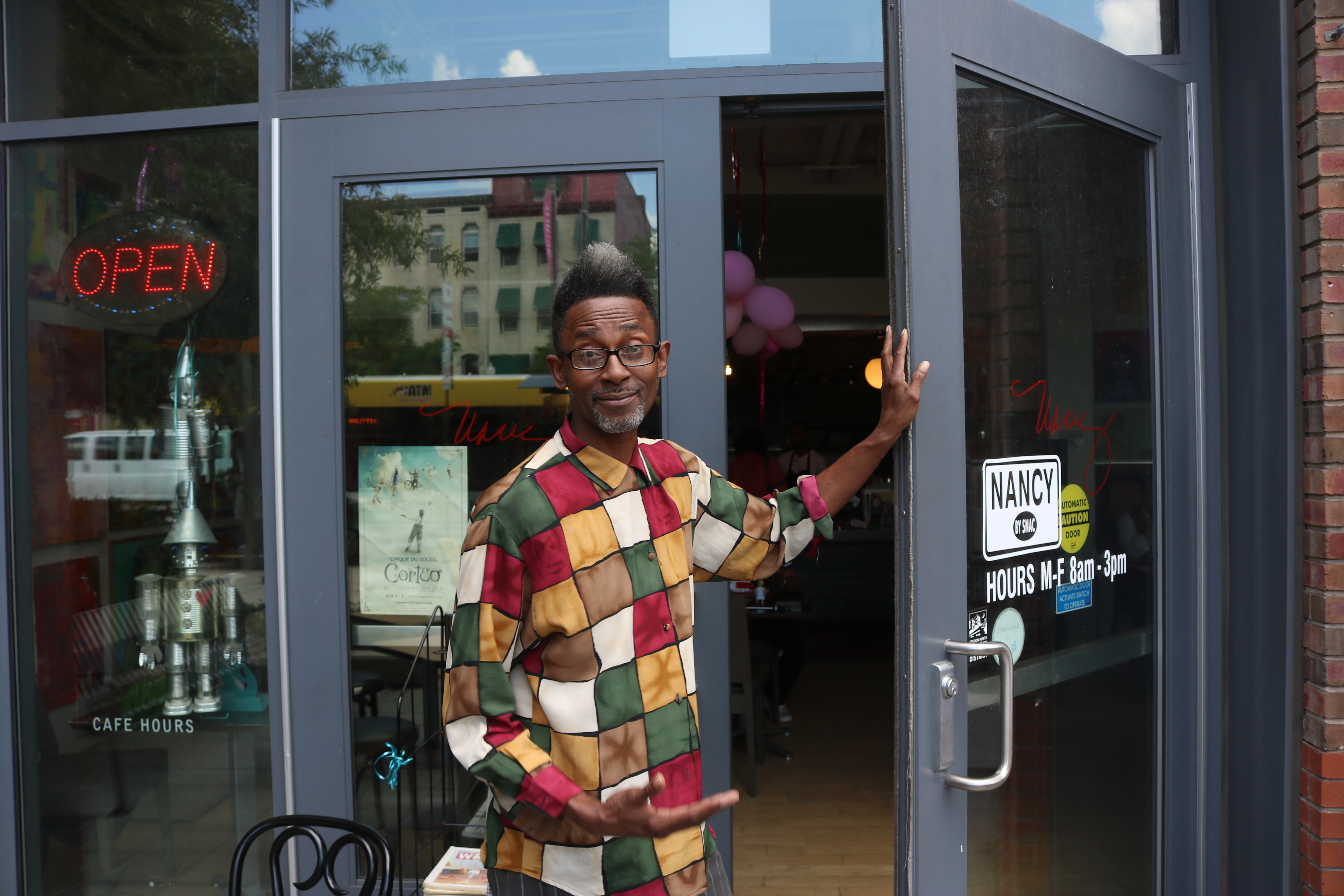 Have you ever wanted to write a play? Well, Kevin has written 14 and produced 6 of them! However, his original passion was poetry. He dabbled in rhyming structures until the age of 23 when he met his hero, the legendary American novelist, playwright, and activist, James Baldwin. At the time, Kevin was in a play by Baldwin at Baltimore Center Stage, and one night Baldwin actually came down to the theatre to oversee some of the production and ended up hanging out with Kevin after rehearsal. They bonded instantly and Kevin ended up sharing some of his compositions with Baldwin who told him outright his “poetry sucked,” become a playwright. Kevin took Baldwin’s advice and never wrote another poem and started writing plays instead. Kevin said “the first black man I ever loved was my father, but the second black man I ever loved was James Baldwin” and laughed while saying “He was black, gay, and brilliant! So much like me!” Because of the relationship between these two men, The National James Baldwin Literary Society will be hosting three days of events at Nancy by SNAC in the coming months, make sure to check out Culture Fly for more information! 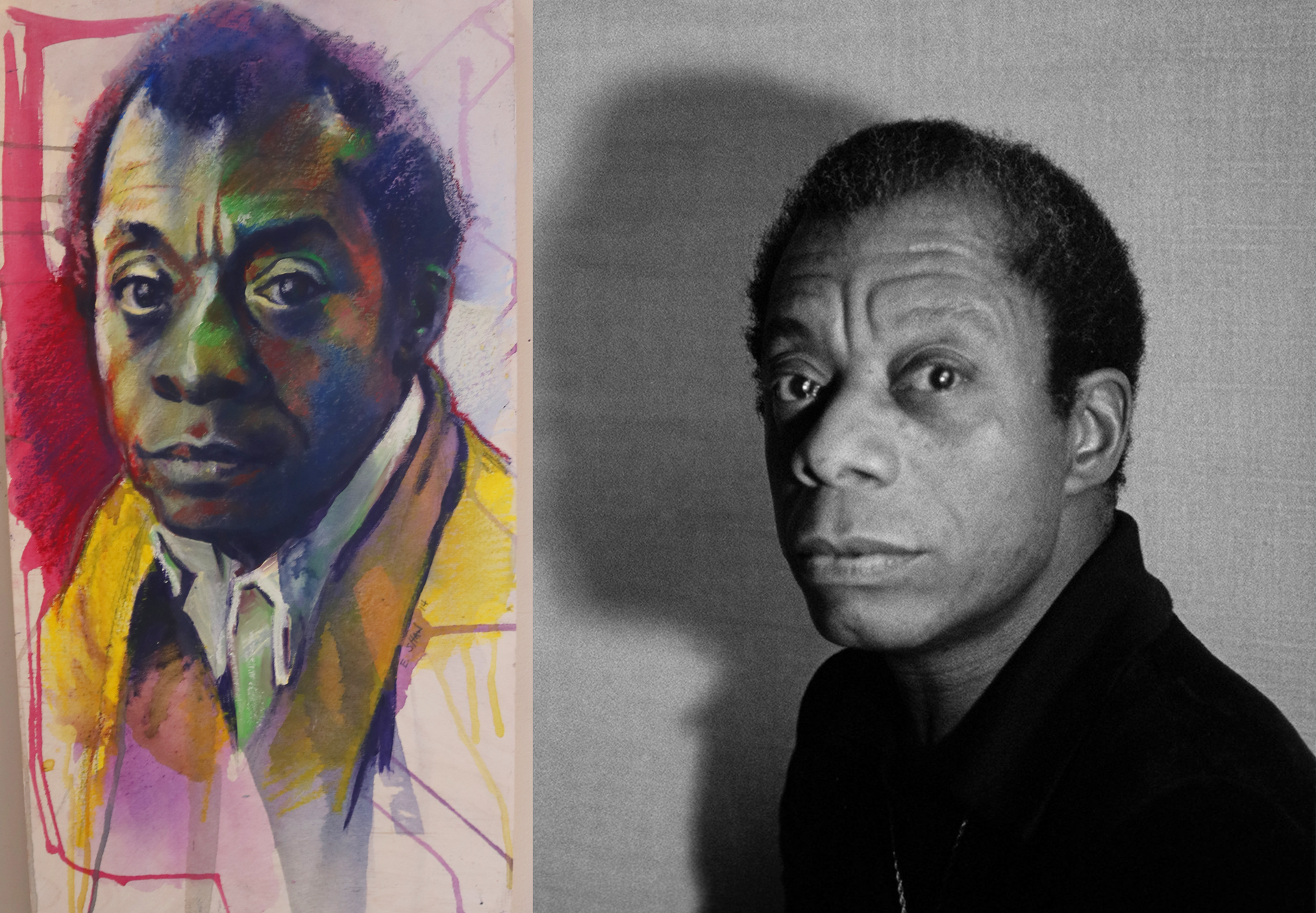 One of Kevin's favorite art pieces in Nancy is a painting of James Baldwin that was done by local Baltimore artist Ernest Shaw.

If you have ever been inside Nancy by SNAC, you have felt the incredible and welcoming environment that Kevin likes to call the “ARTmosphere.” I asked Kevin about how he and Bill have been able to cultivate such a warm energy, and he replied “what my partner and I have done is try to create a cultural canopy of sorts with our two restaurants, places where like-minded people can come together and eat, drink, look, listen, and share ideas. In the arts community, there are pockets of poverty and islands of excellence, and we need to find a way to seamlessly bring those two groups together so that everybody can be doing well.” You rarely come across someone who is as caring, genuine, and wise as Kevin Brown, so make sure you stop by and grab some coffee (or tea) along with some laughs at Nancy by SNAC.